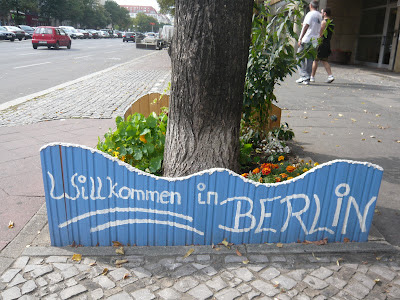 Dear YOU,
“Too often travel, instead of broadening the mind, merely lengthens the conversation”, said Elizabeth Drew, so I'll keep it short: we are back!
Tanked up with sunshine, happy memories and good food. It is interesting how our holiday island has changed - decades ago we were there, four students, one happily blessed with an aunt who needed house-sitters. At that time many people on the island whom we showed a map answered: "Sorry, I have forgotten my glasses" - until we realized that they could not read. This time we didn't see many natives: the chamber maids were from Africa, bar keepers from India, holiday reps from Holland.
We wanted these holidays just for relaxing, swimming and being a complete family with Son and Daughter-in-Law - so heart-warming, so much bliss! The staff thought that Son was the son of Husband, and DiL was my daughter - "So they thought that son married his sister?" "No - they thought we are a modern patchwork family".
Back in Berlin I woke up early: a big fat moon was grinning through the windows, reminding me to get window shades, finally. Astonishing how one get used to makeshift during just plain living - one function of holidays seems to be to highlight 'things' one otherwise generously overlooks.
I know that startled look in Husband eyes when I take down books with titles as "Domestic Bliss" - turning into alarm when they change to "Home Decorating" or, even more frightening, Elsie de Wolfe's legendary "The House in Good Taste."
Yes, Dahlink: the holidays are over!
Yours ever
Britta 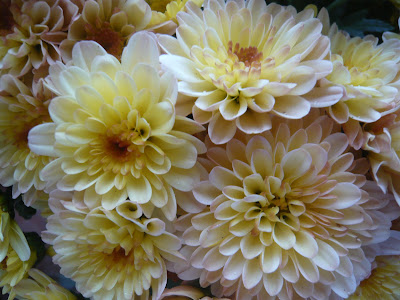 so you are off to holidays in sunnier climes, while I strain my ears to hear the sound of cranes and geese flying over our house: a special service, crane-subscription so to speak - they did it in Hildesheim, Hamburg and Berlin. Yes, one cannot deny it: we have gossamer - (in Germany it is called "Old Wives Summer", because of the soft silver gossamers that flie through the air - but I will not allow that to depress me :-).
Today we still have a beautiful sunny day, but you can feel a certain crispness under the warm rays of the sun, the light is becoming a bit more mellow, and the flower-sellers offer chrysanthemums and asters. I will NOT buy  chrysanthemums now - to early, I think (but when I am ready then it might be too late).
People can't wait anymore. OK - you don't have to remind me that I am also no model for patience either - but I do like seasons. And abhor Christmas cookies in Supermarkets in September (yes! yes! they start now!)
So we might follow your example and make a hasty departure because of that too. With SON&DIL somewhere sunny. (Don't tell me not to mention the precise date on Facebook - I know that otherwise I might have time to ponder on this 'pearl of wisdom' I found in Rohan Candappas' funny "Little Book Of Wrong Shui":

NICE TO SEE YOU
Attract visitors to your home by placing stereo, video and computer equipment where they can be seen from the road. 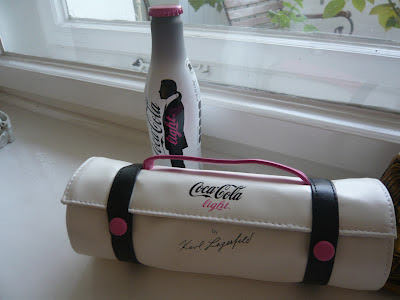 Dear YOU,
“Youthfulness is about how you live, not when you were born.”
He has said some very witty things, the maestro - and some quite insolent ones (e.g. “Sweatpants are a sign of defeat. You lost control of your life so you bought some sweatpants.” - though I think he is right - in a given situation...).
Did you know that today is Karl Lagerfeld's birthday? As every wise woman he doesn't tell us the year of his birth - some say 1933, others 1938. It doesn't matter, because he is young - and here is one of his secrets to stay so:
“People who say that yesterday was better than today are ultimately devaluing their own existence.”
Right!
What you see above is a little bag that a Lady with Style can carry around for her refreshment. (You know it by now: I couldn't resist!) So becoming with a little black dress! 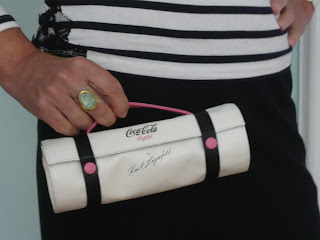 When you open it, you have the exact quantity of a beverage for a walk in the park.  And the best: it's 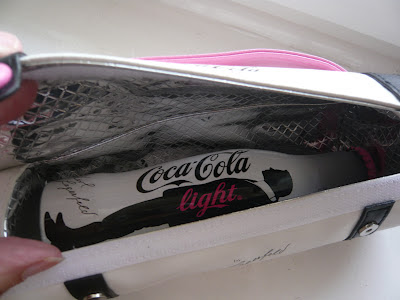 I will end my letter to you with another of his quotes:

“I'm very down to Earth, I'm just not from this Earth.”  You are right, Karl, you are an angel - and your fashion is heavenly too! Thank you! 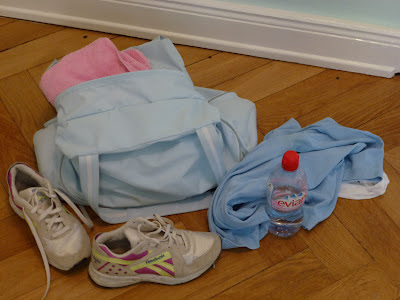 Berlin, 8th September 2012
Dear You,
yesterday I went to my fitness club, Kieser, doing weight training. Repetitions I can do in my sleep - because I do them three days a week since over six years...
Once during the training I had to wait: a man was using the leg press, moaning and sighing. (Did you notice that too? That they start moaning and panting as soon as a woman comes near to their sports equipment? Trying to impress?) When he had finished he said to me: "Your turn! Have fun!"
I answered: "I will! I like it." He, astonished: "Then you are a total exception. I adore you!"
He had more reason than he knew: discreetly I waited till he was further away to put up quietly over 40 pounds more on his weights - my lean legs are very powerful, but why should I rub that in? Remembering Husband's excursions on Georg Simmel, a cultural sociologist, about the "Psychology of Discretion".
Of course Simmel means it different: he speaks of the necessity to keep a distance to another person, even an acquainted one, not trying to probe into your man's soul everytime when he looks grumpily out of the window. Simmel speeks of "private psychic property" - a term almost forgotten - and in modern times of the Internet young people will look as void at you as my (estimated) 14-year-old fitness-trainer when I tell him: "I hope that my weight training doesn't give me muscles like Tamara Press".
That Russian shot-putter and discus thrower is totally forgotten - nowadays I have to say Nadeschda Ostapschuk.
Or even better: Madonna.
(I'm speaking of the photo I saw in the SUN two years ago in Edinburgh). 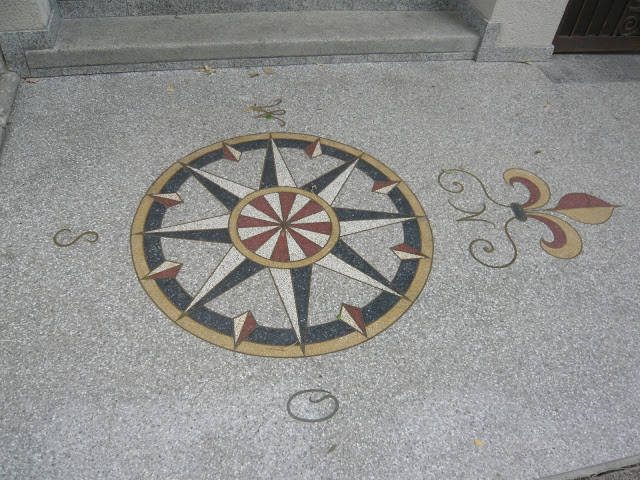 I write without delay, because you sounded a bit worried about the outcome of my story.
The taxi-driver was a square-built middle-aged Turk. Who evidently disapproved of my entirely un-Turk behaviour: I dared to contradict Husband (a man!), because I wanted to put 'the things' into the trunk (where the driver had some things of his own), while Husband suggested: "Behind the front seats" - but there is my place - I never sit beside the chauffeur, I sit regally on the back seat. Throwing more disapproving looks from big dark eyes through the rearview mirror, the driver asked: "Where  do you want to go?"
GOOD QUESTION.
Normally I share the taxi with a neighbour, but today she told me in the very last minute that she was at a birthday party at the other end of the town. Normally she tells the driver where to go.
I suddenly had a total blackout, and told Dark-eye: "I have to go to Dahlem. Just drive on - I will remember the adress in time."
While I tried to remember - ("Something with 'B' - Bader-Straße, Breckenstraße, Bachstraße, no..."), Turk-eye warmed up and remembered that A Man must help a Damsel in Distress. He suggested addresses with 'B', while Husband tried to telephone the lady where we all shall meet. She didn't answer the phone. Our neighbour's husband was not at home.
"Go on, now left", I told the driver."You know, I have BEEN there, and when I have been once there, I find the place even in deepest night." (You, my dear, know that I remember colours and faces and normally also names, but He looked at me as if my second name was Scheherazade from One Thousand and One Nights, lolling on his back seat.) "Ring another neighbour?", he asked.  "Can't - my Smartphone is New - only the number's of Husband and Son are stored." (I felt rising respect: a Galaxy S III AND mother of a son!) "But drive on - now right..." He did. Brooding about the old prejudice that Germans are orderly, correct, meticulously and well organized. 'This one', he thought, 'isn't'.
But I succeeded in melting this iceberg!!
I tipped on his shoulder (very un-German too, to touch an unknown person) and beamed at him: "You know what we'll do if we don't find the address? We'll have a fine picnic - I have enough to eat here!"
That possibility spiritually challenged Husband: he called. Had finally got the address: Bartholomäus Straße 77.
And Miracle!: we were there, that very minute, only one street away, and we had never got lost. In no way whatsoever. Life doesn't serve picnics when you can get to a Literary Circle!

PS: Of course I cooked much too much - it would have fed 12. But it was absolutely delicious.
Though everybody took a second helping from the Mousse :-)
Posted by Britta at 09:22 12 comments:

Email ThisBlogThis!Share to TwitterShare to FacebookShare to Pinterest
Labels: Dahlem, One Thousand and One Nights, Scheherazade 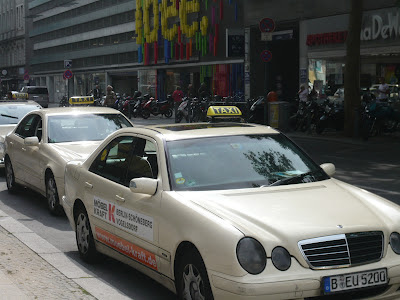 you asked me about my week-end.
It was - well - interesting...
As you know, for more than half a year I am member of a Literary Circle in Berlin - eight women always meet in the evening on the first Saturday of the month to discuss a novel, we always meet at the same person's villa (Why? The Circle exists since 11 years, so I don't dare to ask - they always did it like that), and always one of the women cooks.
Now it was my turn.
Can you imagine that it was the first time in my life that I had to cook for eight persons? When we have guests, we are four or six - or it is a party. Of course I cooked in my student's day for a crowd, and also for Son and his friends - but then it was a big pot of Spaghetti or Chili con Carne.
Now I started on Friday to cook a delicious Red Lentil soup with sour cream; on Saturday I fried a big portion of Thai chicken with Peanut sauce, prepared a beautiful salad, baked freshly baked bread, and conjured my famous Mousse au cholcolat (With very dark chocolat, because Wolfram Siebeck said: "If children want a second portion, it is too sweet.")

People told me that it had been a beautiful Saturday, temperatures almost as in Summer :-)

But the real adventure started when Husband brought me, the shopping trolley and the big bag down to the taxi cab.

As I promised that my letters will be short, I'll stop here and say:       To be continued.

'A little premature, isn't it?'

Dear YOU,
as you know, one of my favourite sentences is: "I could not resist!".
As dear Oscar (Wilde) said: "The only way to get rid of temptation is to yield to it", or was it: "I can resist everything but temptation" - or was it both? Anyhow: I am in good company and think: Then why should I?
So you get my first letter already in September. And, innocence pure: I could not resist this little find on the Flohmarkt Tiergarten: such a nice perpetual calendar! 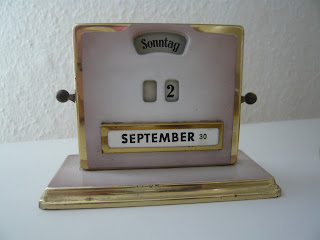 It is from the Thirties, and functions (and is so much easier to handle than my new Samsung Galaxy S III - but that is another story).
Now I look at it and know: "AH! Today is Sunday, September 2nd." (Till now I wasn't always sure).
And you know what? As I can memorize all shades of colours, not only fifty shades of grey, to the exact nuance, I always find things that match the ones I already posses. Look: 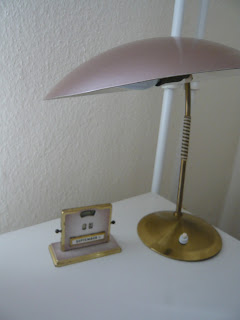 They match perfectly!
Your happy friend