We've been there, to celebrate them: The Rolling Stones in Munich! 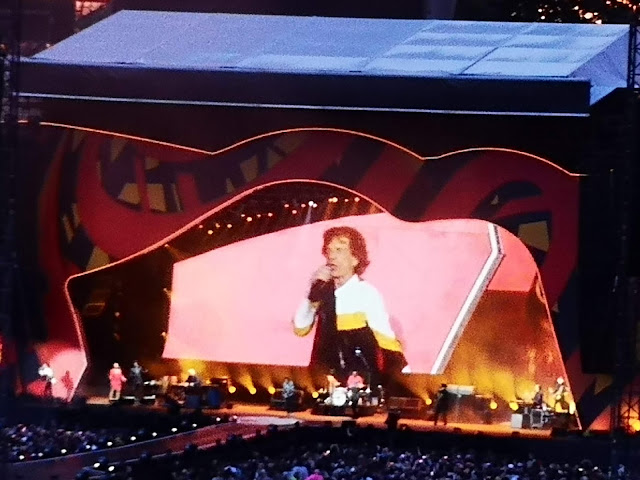 It was such a great show! A travel through time - and the Flying Dutchman and I enjoyed every minute.

First it seemed that we would not be able to go there: over Munich ramped and raged a storm rainfall. I said: "I won't go if that continues - even the Stones are not worth as much as my health."

The organisers posted that because of the rain the entry gates would be opened an hour later.

And suddenly the rain stopped, and the Flying Dutchman (for once much more optimistic than I) said: "Let's go - and when we are at the Olympia Stadion, we'll see if we want to go in or not."

And so we did.

At the moment to use Underground and city railway in Munich is no joy - and that will remain so for the next five years - construction areas everywhere.

The 9 Euro-Ticket (I will write about that mad invention in another post) didn't help: more people on trains, busses and trams than ever. (Though it has funny aspects: the woman sitting beside me in the concert told me: "We came from Hamburg to Munich for 9 Euros - today! - and tonight we'll go back at 4 o'clock." You are allowed only to use the very slow trains - so they got very much travel for their money :-)

In the stadium: masses of people - many wearing T-shirts from older Stones-concerts, and lots of grey hair - but a third of the fans were really young (and NOT daughters or sons).

Munich's sky, which had sulked before, suddenly sent a beatyfying smile at the Stones when they started:

And Yours Truly sang for two hours with the wonderfully alive Stones - bliss!

And all evening it remained dry! 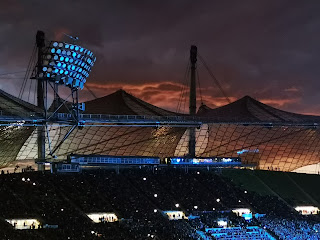