Strolling, walking, a walk in the park... 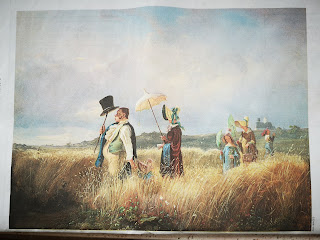 I do not know whether the German painter Carl Spitzweg (1808 - 1885 - late (German) Romantik & Biedermeier) is well-known outside Germany.

He very often did his paintings tongue-in-cheek - though in such a gentle mocking way that nobody felt hurt.

Above you see my photo from a newspaper, Die Welt, which offered an interesting essay on the cultural history of "The stroll".

You might call it "walking", if you are more athletic. Or call yourself a "Flaneur", who is more elegant than an athlete. A famous example of a flaneur is the Berlin-author Franz Hessel (1880 - 1941) - a silent observer.

In the pandemic strolling in the park or woods became a new popular sport. The remembrance of the oh-so-dull Sunday-strolls you had to do with your parents (of that I have drawings in my early diaries when I was about 12 years old) vanished in the pandemic and gave room to a sort of "Lebenslust" - joie de vivre - zest for life - though I have qualms over the term "zest" when I look at Spitzweg's painting "Sunday Stroll" - that family seems more sedate...

Maybe they are complacent antecedents for the Western discovery of Zen and the Art of Walking?

Yours Truly - as you know by now - enjoys her brisk morning walk up the high route - through fields and hilly landscape, which gives me time enough to reflect about "Being Seen": only when I changed my clothes to a fashionable sporting outfit, the inhabitants of the Bavarian village, where I spend great parts of my life now with the triplets, noticed and talked about (and with) me doing "Walking".

I did it before - in Jeans and a T-shirt - but the phenomenon "Who is she?" when seen WITHOUT the triplets (a phenomenon I noticed too when I was a mother)  - or without sport-dress came into the picture again.

I miss being a Flaneur in Berlin (nowadays the word-police "created" the "Flaneuse", which I detest) - with little excursions into cafés where you can sit and listen (same blip as with the users of cell-phones: both believe they are invisible and inaudible :-)

Well, I'll pick a quote from that essay by Claudia Becker in DIE WELT:

"I can only think when I walk. If I stop my thoughts do the same; my head moves in unison with my legs." Jean-Jacques Rousseau.  (my translation - and hopefully that sentence is only a half-truth)

If in doubt: Snatch your trainers!