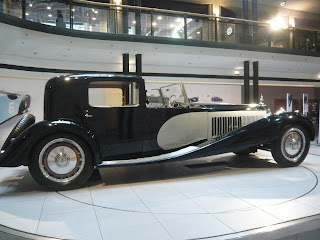 "You know", asked my new friend, the soldier from the Royal Hospital Chelsea, "you know how we call people like you?" "No?"
"Petrol-head, that's what we'd call you. Very unusual in a woman."
In my life I had so many cars that I can fill long winter-evenings with their stories. The silver Lancia Beta 2000 I loved most - more than the Audi 100, or the big Volvo limousine or the Volvo Kombi, which superseded the second red Lancia (in the meantime I had become a mother and behaved properly - no more races with daft Alfa Romeo drivers who always underestimated the potential of my Lancia, ha!)
But my dream car - as I told you - has always been a Jaguar. Not Inspector Morse's Jaguar Mark I (almost impossible to get), not the Jag E-Type (oh! oh! - saw a sky blue dream dream yesterday), but the Daimler Double Six.
And I found it: Black. With cream-white leather seats. Top condition. Fair price - affordable luxury. ("And", said my son, "you don't drive much, so the 21 liter fuel it needs in the city won't harm you.")
Oh, I already saw me wearing the little lapel pin my friend Anne had given me for my birthday.
And then it happened. 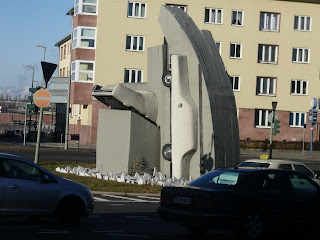 I did something I should have done a long time ago.
I opened the door of the dream car (what a sound!), I climbed into it (heaven!) I looked into the rear-view mirror (yes! it looks divine on me). I looked again, with driver's eyes. And saw: NOTHING.
Rectification: I saw the contour of the back window.
Only the contour.
Now you know: this Jag is 5,148m long. A driver who isn't able to park that car properly in a narrow city is for me the epitome of ridiculousness.
I know when I am defeated.
But thought that it was salt in the wounds of my bleeding heart when son texted me an SMS: "Buy a Mini!" Sarcasm in the very young - so unbecoming! :-)  That was error no. 2:  he (previous owner of two Pontiac Firebirds) meant it.
"It is a nice, easy city-car", he told me.
I am able to learn from my errors (hopefully) - so in Berlin you could see me yesterday driving a rented black Mini Cooper. I'll test it until I find one to buy.
PS: Sighing secretly: the company doesn't let Jags...