Iwan Odartschenko and the Memorial in Berlin's Treptower Park 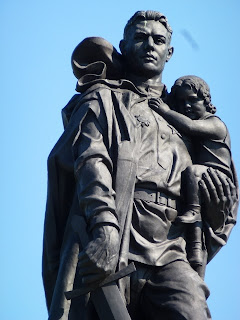 Two days before I read in the Berliner Zeitung of the death of Iwan Odartschenko, I had asked husband to  come with me to Berlin's Treptower Park, where I had last been with my parents and our East Berlin friends when I was seven years old.
After leaving the S-Bahn and walking a while through the lovely Treptower Park, we saw a huge marble arch. "No", I said, "that's not what I remember. It was much taller, and there was a statue, and I had to mount many, many steps." "You were smaller then", husband gently reminded me. We walked through the Arch. A long shady avenue led us to a huge semi-circle with a white statue of a woman in the middle.
And then, when we turned, it took our breath away: 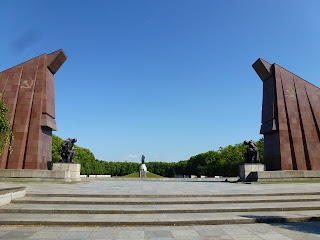 A long, long avenue, double poplar-lined on the outsides and weeping birches at the inside rim led us to a symbolized gate, formed by two monumental lithic flags, under which two soldiers bent their knees in mourning.
When you walk through that gate of honour, the grounds even increase the impressing view, of which my camera is not even able to give you a hint of the extent: 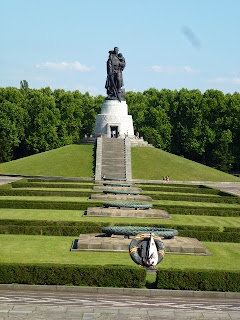 Maybe this photos from the official show-case will help: 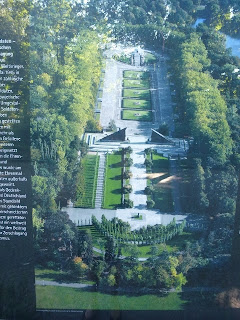 Over 7,000 Soviet soldiers are buried on this cemetery.
"The ensemble is dominated by the main monument on the opposite end: a hill with a mausoleum supporting a bronze statue of a victorious Soviet soldier." 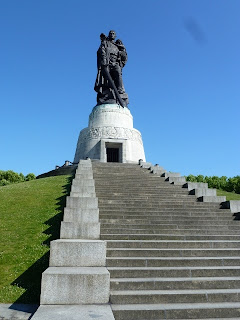 I could show you a lot of impressing photos I took: of the white sarcophagi at the sides of the cemetery, the marble inlays of Victory Laurels, or the mausoleum. If you are interested, please look here at Wiki's link:  http://en.wikipedia.org/wiki/Soviet_War_Memorial_(Treptower_Park)
Iwan Odartschenko, the Red Army soldier who modeled for the Memorial, died a week ago at the age of 86. The artist Jewgeni Wutschetitsch had discovered the young soldier after the victory of the Soviet Army in occupied Berlin. The monument was inaugurated on May 8, 1949, the fourth anniversary of the end of WW II.
What impressed me was the dignity of this memorial, and also how the artist had chosen nature to support and symbolize the atmosphere of the whole place: the weeping birches, leading (and mirroring) to the lowered flags; the rows of poplars (nobody of the official show-case writers seems to have noticed that they look like the marching soldiers on the sarcophagi): 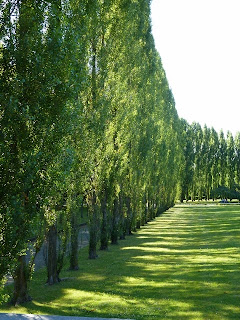 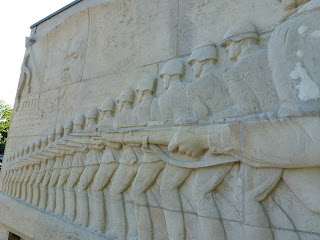 In war, that you can see clearly, a single life is nothing. But this place of memory, built for "honoring the victors as heroes and liberators", as the official text tells, shows more:
it might be that my eyes of a woman made me see the other part of the story that the artist showed, but not the official text: 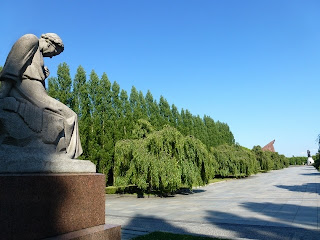 when you come back from the monument of the hero, you can't but walk directly back to the woman - 'Mother Homeland' - a mother, or a lover - sitting very alone, sitting heartbroken, bent and weeping with grief, having lost her son or her lover forever to eternity - the hero is unreachable for her.
And I, feeling forelorn and very, very small, look up to the sky. 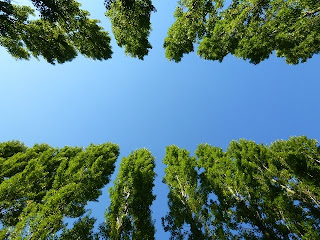