That was a saying I sometimes had to listen to from my late father - and now I heard his voice clearly speaking to me again.

I was very, very lucky under the circumstances - got only one not too deep clean cut.

Fate had given me only a slap on my fingers ("Idiot!" fate hissed - I protested "But all guidebooks say you should never take pars pro toto - or was it vice versa? - it was a foolish act, but I am not an idiot!" "You were", my Guarding Angel intermeddled with a mild beatified smile). 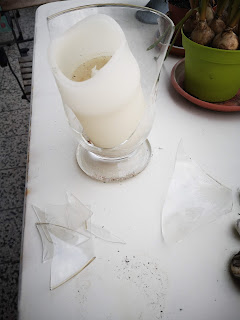 So: what had happened?
As always, I went on my balcony in the morning, lit the star-blink-string, which the triplets adore so much, 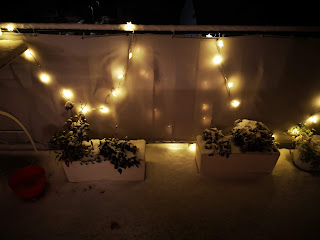 and then I wanted to "lit" the electric candle which hides its fake being in a beautiful glass container.
We had had minus 9 degree at night.
The pillar candle was frozen into the glass.
The switch of the candle is in the foot of it.
I tried to free it.
Didn't work.
It was very early in the morning and maybe my mind was not only sleepy but frozen too - the only excuse I can find - so: I pressed the glass with the left hand and pulled at the candle with the right.
Klirr!!!
The result you see above: shards - and I felt it: a cut in my left hand, between thumb and forefinger. Luckily not soo deep. But blood.
I was too shocked to think of "red as blood, white as snow" - I hastened into the bathroom, could not find any plaster - oh, good, a spare one hid in my little cosmetic bag - and after applying it I sat down, hand in the air.
I thought of WHAT MIGHT HAVE BEEN.
Stopped these thoughts, thinking of my New Years resolution (one of a few): "No drama queen anymore!"
(Besides: I had no audience).
PS: I had lots of plaster as I later found out. Maybe before it was   plastered around my brain...
Posted by Britta at 11:58