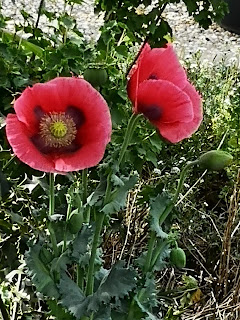 
In my head drones the Beatle's song "I'm so tired".

Tired of all those horrible news, tired of feeling like the personification of Anais Nin's title "Under a Glass Bell" because of Covid-19, really, really tired.

I went to bed early - result: I woke up at two o'clock in the morning. Hoping to sleep again - 45 minutes later gave up that hope, tiptoed to the kitchen and sipped a glass of hot milk with honey.

Which makes me think of novels by Barbara Pym where the sleepless spinsters are always drinking Horlicks and hot cocoa.

No sleeping pill has ever passed my lips - and I'd never had one in my house.

I look at the beautiful photograph of papaver somniferum - which I took it in Noordwijk. I know an even paler lilac coloured version of this plant with silvery leaves - and instantly feel sleepier, as "somniferum" means "bringing sleep" - (yes, not everything "natural" is harmless :-)

Did you know that in German prisons it is forbidden to eat poppy-seed cake?
Because it is not possible to distinguish between the results of drug-abuse and the remains in your blood after a big yummy piece of cake.

I remember that as children we were always warned not to eat too much of this cake - and that is not an old-wife's tale: poppy-seed cake contains Thebain, which you earn by using the milk of unripe papaver somniferum poppy-seed capsules. In cake you'll normally find very low amounts, but new ways of earning and processing the seeds can let it soar.

Well -- I'll give Morpheus a second chance. Nighty night everyone!