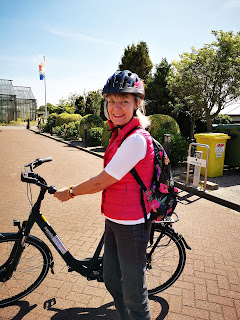 A bicycle helmet is seldom looking "smart casual" - and being vain the only way to console myself is: A head bandage doesn't look neither very elegant  :-)

Once upon a time, I was biking Then, a long time ago, I stopped. (The reasons are too complicated to explain here).

When in Rome, do as the Romans do!

So, when you are visiting the Netherlands, you might be well advised to cycle too - they do it from the day they can stand on their own two feet. They call it "fietsen", and they look adorable doing it - often you see two or three meisjes (their girls) in a group, chatting cheerfully while biking, but also quite old people peddle determinedly against the strong wind.

They have enviable bikeways (not as in Berlin, where we had this year alone - from January 2020 to end of May - 7 dead bikers - which is "better" than in 2000, where there were 89! - but then: in the Corona-month there weren't many cars driving, streets empty - and we haven't even spent half of the year). I might sound a bit gloomy, but I thought of them when I started biking again, the day before yesterday.

But: I am courageous. I rented a bike - and bought a helmet. The bike-brand is called "Gazelle" - 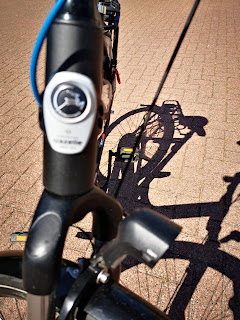 though neither the bike nor I on it looked gazelle-like (me running: yes. Me on a bike yesterday: definitely not. When my late father thought that someone did something ungraceful, he murmured: "Like an ape on a grindstone").

I have to admit: I was afraid! For me the big black, heavy bicycle was not easy to ride or direct. To get up: Phew! To go on: Whew!
But I didn't give up - I practised (4th gear on a long even road :-)

And: Skill comes with practise.

PS: Have you tried to enliven an old skill lately? Tell me, please, to cheer me up.