You Have to Accept a Low Blow in Order to Survive 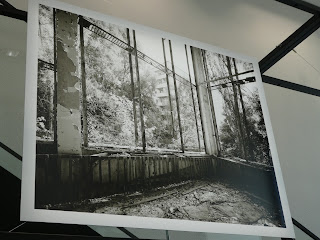 in the exhibition "Third Landscape" by Volker Kreidler they show betwitching photos of the vegetation around Chernobyl.

"Reports of vegetation in the exclusion zone around Chernobyl have been increasing over the last few years. While flora and fauna are apparently returning, paradoxes in the natural gene pool have been observed. Despite the radiation, a self-generating ecosystem with high viability is forming in the area. New, healthy trees are growing and replacing dead forests. Lynx and other rare animal species are settling again."

(See the full quote on this photo): 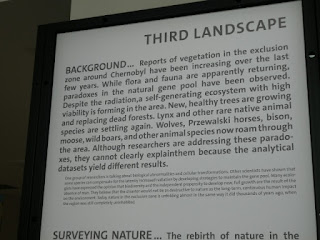 At home I stirred pensively the girolles/chanterelles in my pan - they were coming from a country where - so they had told us - after Chernobyl the decay period would last for a time with so many zeroes following the 1 that I could neither imagine nor pronounce it...

The human mind and the human heart easily forgets, I mused.
That may be necessary to survive. Sometimes you have to be able to forget (at least: not think about it every day) - otherwise you will go mad.
Of course one can wish and pray that mankind gets more reasonable (though at the moment the world does not look like this - yet: has it ever?).
"The lynx, the wolves, the Przewalski horses, the bison, the moose, the wild boars roam through the area again."

I might join them - I am a part of nature.

Interesting though:
when I looked closely at a leaf from a "healthy tree" from that area, I saw:
1) it was THERE, the leaf, the tree - and its existence I call a wonder.
2) Yet to believe that it survived without a wound - that would be naive.
You have to accept change   -   you have to change, you have to muster all your strength, you have to get up again, though you are tired - only then you have a chance to survive.
Admittedly: it hurts. 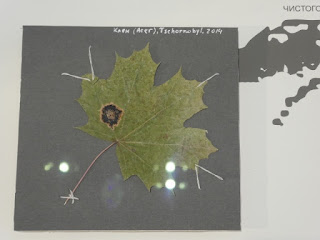