You asked for it! (Venice again)

In a comment Rachel wrote: "I was thinking we would have to ask Inspector Brunetti to solve the mystery of the disappearing post for us."
You bet! Il commissario was joy-riding on the Canale Grande, and if you look closely you might detect that in January Venice does not sport so many tourists, and those who come are mostly from China and Japan and master the Art of Canouflage perfectly. . 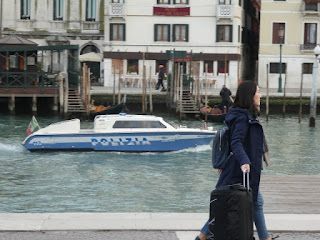 Yes: they totally merge in "the real stuff": 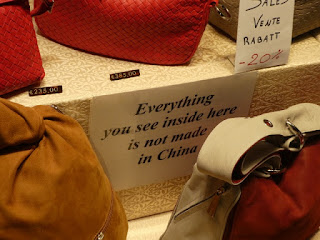 Buy little factories in Italy to be able to use the label... Well - "home-made" seems to be  the new trend :-)
I could show you now typical photos from typical Venice. In fact: I could use the photos my late fathers had taken when I was just a pre-school child - 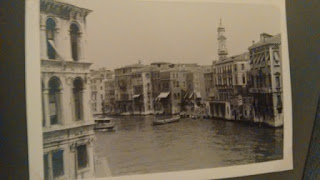 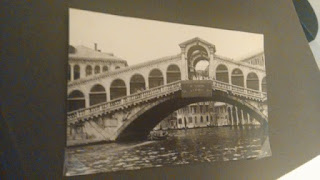 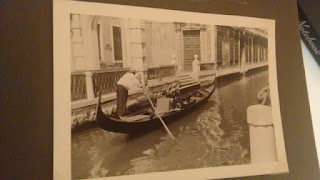 Not changed that much - though: a little colour added nowadays :-)
No, I will serve you only some snippets from my impressions of Venice.
First a question that really baffles me: how come, I ask you, that my female friends all rejoyce in visting cemeteries - and ask me to join them - ME, almost a thanatophobic? (I cross myself if I have to walk along a freshly dug empty grave - no, I'm not Catholic, but in this case I am not choosy and grab what might protect me :-)
So: "Cimitero" it had to be, on my first day in Venice! (Came back hell-bent to "carpe diem" even more). 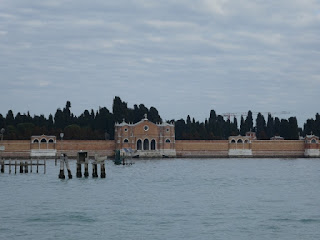 Cling to dear life as good as I can - as these spartan and easy to keep Venetian balcony succulents. 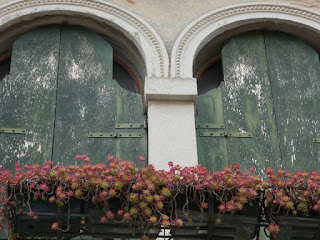 Visited the church Madonna dell' Orto - which Jane Hattat (!) personally recommended to me. 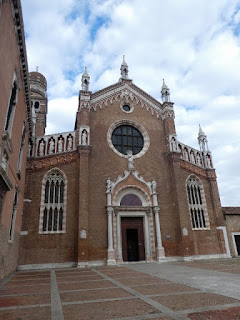 So beautiful! Built in the XIVth century - with Tintorettos, (by father and son) and other famous painters. AND a heavily built white Madonna with child - in the 15th century they found her in a garden (= "Orto") near by and think her to own legendary healing powers (I, though I am very glad to say I'm healthy, thought; Assuming that it is right --- it will not hurt -- See: cemetry and cross above. At this point Elvis has left the building - better: my son would have left this post, because he absolutely hates superstition, while I ... well, well, well).
For you, My Dear Enlighted Reader: skip the madonna if you feel like that - but look at this marvelous church - not many of the lazy tourists find it, because it is up in the north, out of the conventional paths. (Though - that is what all tourists think - the oxymoon of secret insider tips...)
When you go there, you are also near to the Ghetto Novo (Sestiere Cannarigio) 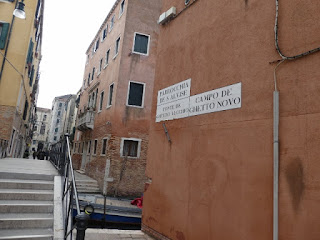 which was founded in 1516 - (the time before the Jews got only a temporary resident permission). The word "Ghetto" comes from here, and they had to wear a yellow sign on their clothes when in Venice. Each night the gates of the Ghetto were locked and guarded - and the inhabitants of the Ghetto had to pay for this (sic). Though to be fair: that was a common practice at that time: the German merchants who lived at the Fondaco dei Tedeschi had to endure the same.

I see: your eyes are shut, your face looks like a bored mask, only politeness keeps you smiling mysteriously. So I'll shut my mouth (for today, that is). 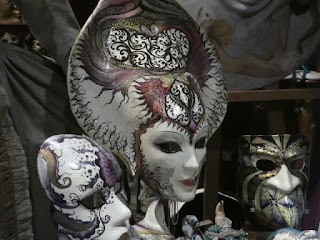