Some surprises in Berlin 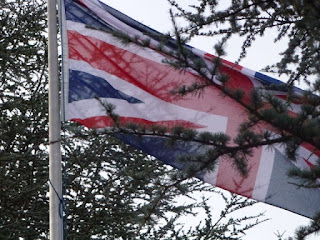 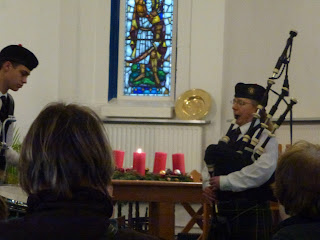 Dear You,
yes, I was surprised to see this flag in a vicarage garden in - Berlin!
In St. George's Church in Berlin's West-End they held for one day a "Charles Dicken's Christmas Fair". And of course Yours Truly took instantly the underground - in which a lot of men wore white-blue scarfs, fans of Hertha BSC, who yesterday played against Bayer 04 Leverkusen (and won 2 - 1: I heard their singings from the nearby Olympia stadion).
But the little band of the second photo drowned everything. And, as Dame Edna would put it: "I mean that in the nicest possible way."
Anglican Services in Berlin already existed from the 1830s, but the first St. George's Anglican Church in Berlin was built 1884 by Julius Carl Raschdorff, who went to England to study Anglican churches. It was built on the grounds of Schloss Monbijou,
1888 Queen Victoria and 1913 King George came to visit - and that church was the only Anglican church that stayed open during World War I, because Kaiser Wilhelm II. was its Patron.
In 1944 and 1945 it was bombed by the Allies, and 1945, after the German partitition, the GDR finished it off while clearing away the ruins of Schloss Monbijou.
The little church of today was rebuilt in the British sector of West Berlin and was a garrison church. On the pews you find military emblems of British regiments: 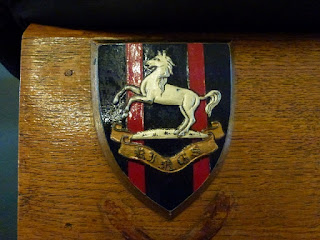 1987 they found the silverware that Queen Victoria had endowed - in a cellar in Berlin! Today it is in use again - as the church is, for civilians (and for TV the sermons "Hope for Tomorrow")
I had a lot of fun - the tearoom was overflowing with people, but I found a seat. The Indian lady who sold the wonderful cakes cast one look at my slim figure and decided: "These slices of chocolate cake with cherries are to small for you: I give you two!"
I talked a lot with three "expats" - the 'man from the North' wondered why I visited Newcastle, and the jolly lady laughed "Soon my German will be better than my Englsh" (she was searching for the word "flag").
On the fair I bought German honey - after short consideration I took the one from Brandenburg, not that from the Preußenallee (the street where you'll find the church): Berlin's air is heavily polluted - so I was cautious...
Yes: I'll come back to that church - I want to hear an English Sunday Service, and hope for Choral Evensong.
Promised: I will not only come when my three raffle tickets prove to be winners! (They took our telephone numbers).

PS: A lot of information I got on site - parts I found in all-knowing Wikipedia.