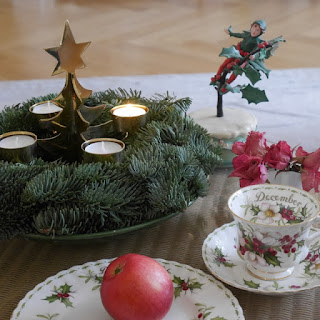 Dear You,
Yesterday I succumbed at the last minute - I bought an Adventskranz.
It was rainy and dark, and actually I wanted to buy a pot of Helleborus niger, Christmas roses, though against my better judgement: they grew formidable in my garden-flowerbeds, but on the balcony they always were a disappointment, ever.
But then the price was very high and the quality low, so I abstained and, maybe as a "displacement activity" (as birds do when they don't get what they want - then they do "Now for Something Completely Different"), I bought the Advent wreath.
In former times - when we still lived in Hildesheim and our son was a schoolboy - I often wreathed myself - I loved the smell, hated the sticky resin and pricked fingers, and believed that it was fresher than the bought ones. (Though that was easy - bought ones shed their needles when you look at them. I think that nimble Chinese hands wreathe them in mid-July).
Last year I had bought a brass candlestand with four tealight holders and a smart little modern brass Christmas tree in the middle. That should be enough, I thought. For the heart (= Kitsch) my Christmas cup and a little musical clock should do.
I thought.
Long ago I had decided against a fake wreath - though, for the first time in my life this year I saw some utterly convincing ones. If I want a wreath - and not for religious but only decorative reasons - I want the full monty, meaning: especially the smell.
On the balcony, a long fake fir garland beautifies the balcony trellis - together with little lights - and even I, being VERY scrupulous about form and colour, cannot tell the difference till I touch it.
The "real" Advent wreath shed spitefully a few needles onto our doormat when I brought it in. And as soon as the mist of the rainy dark night had evaporated from its needles, it looked instantly like all the other disappointments of the years before.
I thought about principles.
Will I "preserve" them? As 'preserve' in marmelade?
Or will I shed them on the floor, like needles, next year?
Ad-vent of total liberation?