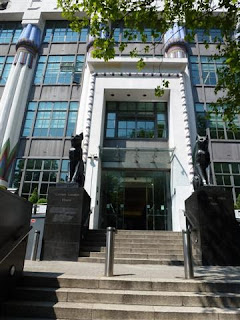 In a comment to my last post John Gray remarked attentively:
That is ONE. Art Deco cat
"Potzblitz!", as people around Frederic the Great would have said - or, also charmingly old-fashioned: "Ei der Daus!" (Nowadays even Google says only "Oops!", not even "sorry" - but what can one expect of an institution that - at last in Germany - also doesn't know the word "please"? "Sign in!" they bellow).
So: only ONE cat. How could I overlook that? Do I become professionally blinkered? I mean, being deeply involved in Crime TV, of course I know "Silver Blaze" by Sherlock Holmes, the famous short story

(Yes, from this short story Mark Haddon got the title "The Curious Incident of the Dog in the Night-Time").
So: There is only ONE cat, says John. Where is the other?
In Germany we have a saying - "He said he just left the house to buy some cigarettes"  wails little wifee - meaning: he will never return - up and away he is, the rogue. Trying to Catch a Carven A?
Had the cat sneaked away? Applying for  a major part in "A Lady  Cat Vanishes"?
Our German poet Matthias Claudius has written a beautiful song, "Abendlied" - (see my translation on my blog Britta's Happiness of the Day: http://burstingwithhappiness.blogspot.de/2012/11/abendlied-evening-song-der-mond-ist.html)
There is more moon, says Claudius, as you sometimes see.
Or as Shakespeare said:
"There are more things in heaven and earth, Horatio,
Than are dreamt of in your philosophy."

I love Zen. As you know there is a general absence of symmetry in Japanese art. Okakuro notes that true beauty "could be discovered only by one who mentally completed the incomplete."

But for the lovers of Western harmony I added the second cat above, symbol of the Egyptian god Bastet.
Is it perfect now, John?