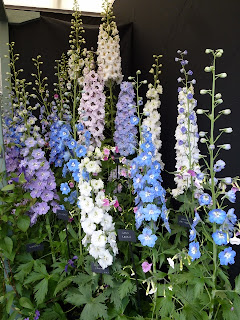 The only delphinium which won out against the slugs this year - and there weren't that many -  is of a pushy sky blue. I would call it neon-blue if it exists as a plant colour. Or glazed-tiles-swimming pool-blue. It is not disturbing, but it looks artificial.
"The world is getting bluer every day" is the headline of one chapter in Karl Foerster's book "The Gardens' Blue Treasures", and he is right: the domineering colour among pink and violet-blue now is blue: the delphiniums, the many sorts of bellflowers: clump-forming Campanula 'Jewel', the vigorous Campanula portenschlagiana or the rampant, spreading Campanula porscharskyana, the balloon flower Platycodon grandiflorus, and the big peach leaved bellflower Campanula persicifolia. Add blue lobelias, the last of the blue irises, blue lupines, cornflowers, flax and pale blue Veronica gentianoides. At the wall of the house Clematis x jackmanii starts to open the first four leaved flowers, velvety dark blue. As I planned it climbed into the vine and replaces the annual morning glory, although substitute would be the wrong word: it is something so quite different: deep dark night-velvet versus tender moon shimmering light. 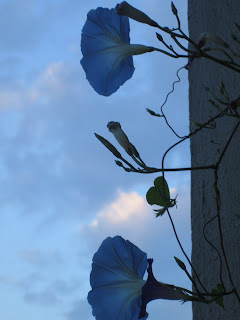 Of course my garden is not an ocean of blue - that I would think too monochrome. (I am also not really in love with 'white gardens' - I liked the one in Sissinghurst very much but would never try to imitate it - even if I could, which I can't).
Delphinium is praised by Karl Foerster most profusely, and he was most famous as a breeder.
And he was a linguistic bard - the German words he invented for his failed experiments of breeding are highly amusing: there are the Straw Fire sorts, the Sun Wrinklers, the Gap Panicles, the Frost-Endangered, the Leaf Invalids, the Ugly Witherers, the Scrooges, the Highwaymen (lying in ambush), the Miller Lads (suffering from powdry blight) and the Candle Flexers. My tile blue delphinium evidently belongs to the highwaymen: it got laid by the rain, and only the lupines on the other side of the path give it a little footing.
I love the enthusiasm and powerful eloquence of Karl Foerster, although when he gets into ecstasy he sometimes overshoots the mark. So he seriously suggests "pure blue animals for the garden".
"The peacock is a surprising garden jewel", he harps. That may be so, but when I was in England, I thought its voice even more surprising, very very loud and not that melodious to my ears. That is not mentioned by Karl...
But he alludes that a peacock sometimes bites into the skirts of the ladies, and thus he advises terminatory: "Who acquires a peacock shall demand a philogynist."
My profound experience tells me: A man who is vain like a peacock seldom is a philogynist - more often this seems to be an oxymoron, a contradiction in itself...