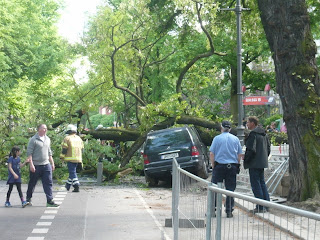 "Yes - go and make a plan,
be a bright chap,
and then make yet another plan,
both won't work."

said Bertolt Brecht in the Threepenny Opera.
My plan was taking a little stroll to the Charlottenburger Schloss - our Ascension Day was windy, but mostly sunny. And then I saw it: ten minutes ago that tree had crashed down - wrecking two parked cars, but hurting nobody.
So easily plans can be changed. (Note to self: Always leave the house ten minutes later).
I never forget how silly I thought a woman in a TV-show in Baden-Württemberg, who proudly showed her flat to the reporters: "Look here - I thought of everything. The whole flat is disabled-adapted - for the days when I am old." That woman was not a day older than 29 - (it is a long while ago that I saw it - so I could not anticipate the hilarious scene in "The Best Exotic Marigold Hotel", where a couple in England visits such a flat for old people, and the manager proudly shows the emergency button and a handrail on one wall to get there - "Why not put it diagonally through the whole room, if I fall down on the other side?" asks sarcastically the unnerved and still healthy potential buyer.)
No, really: the over-cautiousness is shere fright, the attempt to control everything, so that life might go on forever. But Life is a gloriuos mess. Planning is good - but as Tove Jansson's Snufkin says so wonderful:
"Nothing is stable and sure, nothing is ever really finished or say irrevocable. That is reassuring, isn't it?"


The (Prussian?) gardeners who planted the borders in front of the Schloss might have been afraid (or compulsively orderly) too: 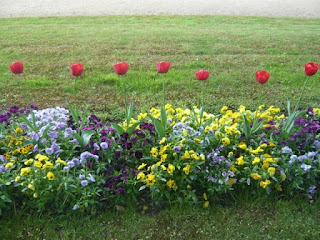