My Cup of Tea (Little Stories of Your Life) 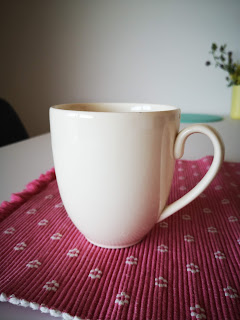 There are two favourites - and that tells a lot about me: very often between two extremes.

The cup which I use most often is a mug. Relaxing cream white bone china, Wedgwood. Snagged from a discontinued line in the classy porcelain shop Lindemann in Hildesheim - a shop with intimidating older salespersons, clad in black, and the shop now closed long ago. (Do you know that prices for valuable porcelain as Meissen or KPM crashed deeper than many stocks now?)

As often I didn't buy as much as I "should" have bought - I had just become a young mother, and we had bought the huge Art Deco villa, thus money was scarce and I thought well before spending it.

I only bought four mugs and added two round teacups with saucers (one long called from this mortal life, and I don't know whether the shards brought me luck, as a German proverbs promises). Those cups are in my Berlin apartment, the four mugs are justly divided between Berlin and Bavaria.

The mugs feel so wonderful in my hands - glossy and unexcited, and you can trust them to keep the soothingly warmth for a long time in their bone(s) china.

The tea I mix myself - but that is a different story.

And that of the second favourite cup too. 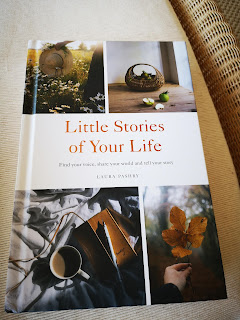 Query: are you content with this font? I like it because it looks as if I have written a letter to you - but maybe it is difficult to read?

Email ThisBlogThis!Share to TwitterShare to FacebookShare to Pinterest
Labels: "Little Stories of Your Life" by Laura Pashby, cup of tea, Hildesheim, Wedgwood