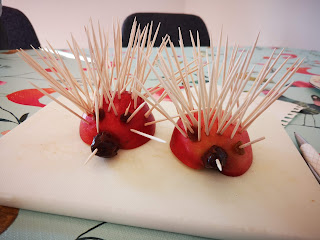 First frost at night - a good time to start the crafting-season with the triplets.

(In German we use the term "basteln", making little things out of chestnuts, wool or Plasticine - which word do you use? The word "tinker" sounds a bit condescending to me)

When my son was small, in Kindergarten "basteln" was looked at with the same disdain as measles - we had to do it secretly behind closed doors at home, the same applied to singing beautiful old German Lieder, these songs were replaced by malappropriate "songs" like "Hollebolleplumpaquatsch" which in the ears of the Kindergarteners sounded wildly modern.

Kindergarteners - honestly! no joke! - you must in Germany now denominate always, always in every line of your text !!  as "Kindergärtner*Innen", to avoid discrimination of the three genders - no joke!!!

(I do not know what will happen if the German political-correctness-language-police reads this  - this is still a secret job 😂, done by many ranting politicians - sorry: Politiker*Innen - and their supporters, so I might better not use it in my blog but mumble behind closed doors secretly - or sing (piano!) the beautiful old German Lied "Thoughts are Free" in the 1842 version of August Heinrich Hoffman von Fallersleben, - and replace Asterix's "These Romans are crazy!" with "These Germans are crazy!" - but the language police is not good at handling humour... )

Back to the roots: yesterday was the first day the triplets did "handcraft". They are now exactly 2 years and 9 days old - and I was astonished (as all proud Grandmothers and parents are 😀), how well they did it.

Of course I had prepared a technical instruction: 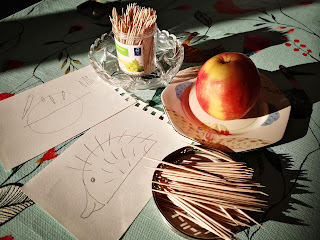 We handcrafted a hedgehog (or, to be precise: two).

The funny thing is: one triplet calls herself "Igel" - meaning: hedgehog - because from birth on she had so many long dark hair spikes that everyone cried "Igel!" who saw her. And I was puzzled when she reacted a bit strange when first I called her by her beautiful Royal English Victorian name (guess - my mouth must be shut). Then I found out, that this name is only used when she is given a warning by her parents - otherwise it is admiring "Igel".

The triplets loved to build those animals, precise and eagerly - and just in time I could save one date - halved and used as snouts, and 4 raisins for the eyes - the rest was quickly munched away. And they admired their very fine work - but the best came later: "Hamm, Hamm!" in German children language: "Eat up! Eat up!" - apple and dates.