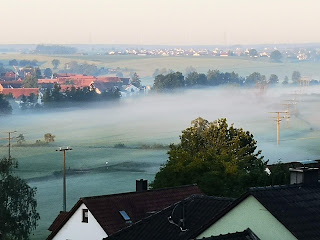 Another very hot day will unfold - the last two days we had temperatures of 34° C, which make you feel as being clad into hot blankets.

In the early morning mist rises from the meadows on the low ground near the little river. It is always a stunning sight. 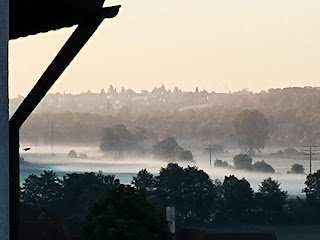 So: No walk with the triplets' electro mobile - but I brought two watering cans, thus we spent a very vivid and wet afternoon in the garden - little hands slided into the cans, discovered how to splash fountains - and the sun dried the clothes at once.

I wonder how I shall name the triplets here - to respect their privacy. They have very beautiful names (and each of them has three - fortunately we only use one, otherwise they would be up and away while we stand around and call them :-)

Elizabeth von Arnim called hers fictional "April, May and June". Might bring confusion to the readers, especially in months with the same name?

Maybe I call them by the name of the Three Graces: Euphrosyne, Thalia and Aglaia - but Euphrosyne is a bit long - and my son detests abbreviations...

So: I will call the unidentical triplet "Igel", which she choose very early to name herself, meaning hedgehog - in the beginning her abundant hair stood away from the head in little spikes; so she heard it very often. Now the spikes changed into a sort of long curls.The uniovular call her "Igel" too.

The first uniovular triplet calls herself "Ada" (which I adore!).

The second uniovular, who is very determined and fearless, has the name of a strong Nordic goddess - the name is short so she can pronounce it almost correct. She is the third of the Three Graces, Aglaia- so I will call her Glaia.

Igel, Ada and Glaia -time will show if that fits.