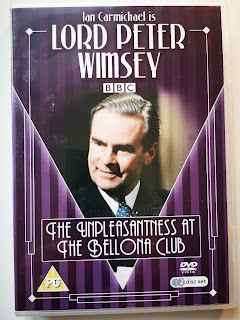 When I worked on the manuscript for the book that should give German Detective-story lovers an overview about how many, many British gems on DVD  exist, of course I saw the screen adaptions of Dorothy Sayers marvellous detective Lord Peter Wimsey again.

Sadly, most Germans know only a few films such as Caroline Graham's 'Midsummer Murder' or Agatha Christie's 'Miss Marple' (and then the version with Margaret Rutherford, not the outstanding Joan Hickson or the version with the late Geraldine McEwan).

TV in Germany tries its best to enlighten them, but what I had in mind is a sort of "opera guide" for British detective TV series from the beginning till now - available on DVD.

I admire Dorothy Sayers so much - a witty intellectual, so much fun to read - and I have to confess that each year since the 1970s I read at least two or three of her novels per annum.

And I can recall vividly my disappointment, when I purchased the first DVDs starring Ian Carmichael, OBE. "Clouds of Witness" was filmed in 1972 - at that time I was a very young student - and THAT was NOT MY Lord Peter! For me Ian Carmichael was an old man, sorry to say. When in 2003 the DVDs with Edward Petherbridge appeared, I was a bit appeased.

Now I saw the series with Ian Carmichael again. And think them very well done. 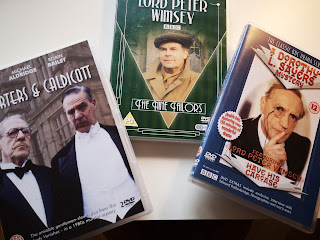