Today is my Birthday 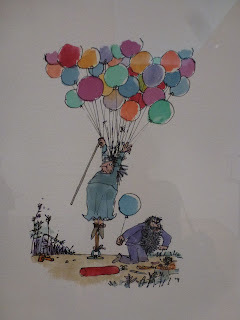 It was a very strange year for all of us - but as a wayward taoist I accept change, though I always try to find a few balloons which make wafting through life a little easier. Of course "wafting" has, as most things and situations, two faces. Some will call it "living in a bubble", I call it "looking for happiness even in tiny things". I believe that many days consists mainly of tiny things.

This early morning I looked at the water-grey sky of Berlin (in my dressing gown, on the balcony, clutching a warm mug with strong tea in my hands) and I had to stare very hard, but then I saw them - sparkling in a hazy misty way: five stars!

As long as I am able to enjoy that, life is beautiful and my greatest gift. 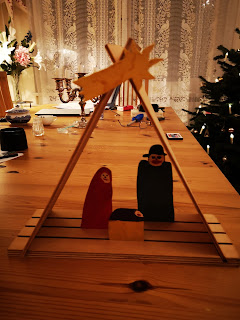 This little crib my son made in kindergarten when he was four years old.
Here it stands on the long table, but then it is put under the Christmas tree.
It is very handy:  you can put the parts together in a flat box (decorated with potato print :-) when you want to store them for the next year. The star is hung up on a tiny nail. I love it very much.
Christmas was fine, very tranquil. I hope you had a good time too! 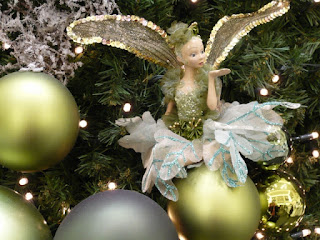 I wish You a Merry Christmas and a Happy New Year!

Don't lose courage - though this year we learned the hard way what beloved John Donne wrote in 1624:

'No Man is an Island'

and that we enjoy our lives, feeling grateful among all our sorrows, grateful for being alive. 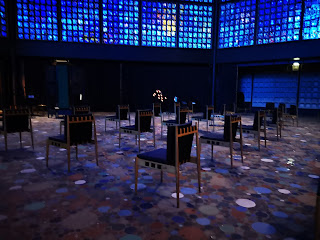 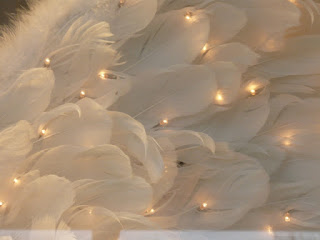 I wish all of you a Happy 4th Advent!

This year was very, very different - for all of us -  from what we had expected.

And I feel for all people who have lost a loved one, or lost their job or have fear to lose it.

But I get a bit bugged by those ones around me who bath in lamentation, wallow in bad news while sitting on a sofa, whining about to have to wear a face mask or not to be able to visit a cinema.

"As we get older, we (...) learn to focus on what's not right, what is lacking, missing, inadequate, and painful." writes M.J.Ryan

This year maybe we had to learn to be less critical, to appreciate unexpected kindness, smiles under a mask and friends who thought of us. Not to rush around like mad - we had no chance to jet just for a weekend to Venice - for 14 Euro! - and jam the streets and canals there, and disturb the inhabitants with the rattatatatt of trolley bags.

Don't get me wrong: I love to travel. I love to walk through my city,

But if it is necessary - and in Berlin we have a strict lockdown, though not as heavy as now in London - I nevertheless can find something beautiful in my day - and be thankful for it. (Look: the geraniums on my balcony are still flowering - in the midst of December! A red squirrel runs over my balcony lattice, here, on the second floor!)

As a topping I douse this with a little sweet sauce of Ralph Waldo Emerson:

"The invariable mark of wisdom is to see the miraculous in the common." 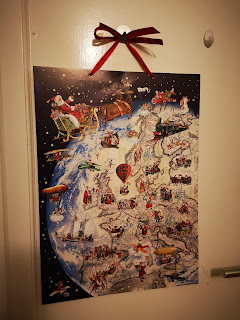 This is my Advent calendar for this year. I bought it in November - because I found out that Father Christmas is on this calendar not only utterly mobile, using trains, sledges, ships - but also carries the national flag.
And The Father Christmas who comes to the Netherlands is there in two versions - two times! 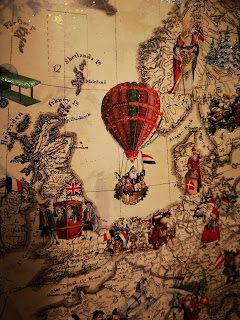 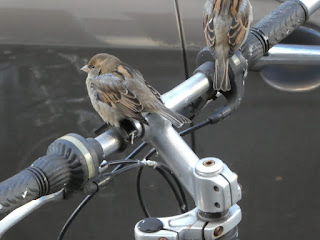 photo: Britta Hügel
December 2nd --- Since three days (and nights) it is very cold in Berlin. My rose geraniums (Pelargonium odoratissimum) still bravely defy the cold - but I have to think about my oleander:  I have enough space, but all rooms are heated, and in winter the plants want it cold. The cellar is no alternative - in Berlin we have long-distance heating - and the pipes run through the cellars - good for furniture that you want to store there - but, as it is warm, it's No country for Old Geraniums.
And I have to think about the birds too. They are regulars for water - the sparrows, blackbirds, a pair of jays, (the magpies do not come). The doves and hoodiecrows I shoo away- especially since I know the Latin name of the hoodies: Corvus corone cornix (Apples autocorrection turns that foresightful into "corona"..)
I love the tits (birds) - and for all of the above mentioned (and sometimes a squirrel) I put out grains etc to feed them.
Sparrows are the typical birds for Berlin: cheeky, bragging and in loud huge groups. They go to MacDonals and eat French fries, they sit on coffeetables and pick at your cake, if you don't watch out - and when I read in a photo-book that is impossible to take a picture of a sparrow I went out and proved the opposite.
Posted by Britta at 20:02 8 comments:

"Rest You Merry" by Charlotte MacLeod 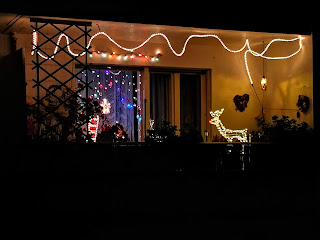 "PETER SHANDY, YOU'RE IMPOSSIBLE!", sputtered his best friend's wife. "How do you expect me to run the Illumination if everybody doesn't cooperate?"

"I'm sure you'll do a masterful job as always, Jemima. Isn't that Hannah Cadwall across the way ringing your doorbell?"

With a finesse born of much practice, Professor Shandy backed Mrs. Ames off his front step and shut the door. This was the seventy-third time in eighteen years she'd nagged him about decorating his house. He'd kept count. Shandy had a passion for counting. He would have counted the spots on an attacking leopard, and he was beginning to think a leopard might be a welcome change.

Every yuletide season since he'd come to teach at Balaclava Agricultural College, he'd been besieged by Jemima and her cohorts. Their plaint was ever the same:

"We have a tradition to maintain."

On the morning of December 22 two men drove up to the brick house in a large truck. The professor met them at the door.

"Did you bring everything, gentlemen?"

"The whole works. Boy, you folks up here sure take Christmas to heart!"

"We have a tradition to maintain", said Shandy.

"You may as well start on the spruce trees."

All morning the workmen toiled. Expressions of amazed delight appeared on the faces of neighbors and students. As the day wore on and the men kept at it, the amazement remained but the delight faded.

It was dark before the men got through. Peter Shandy walked them out to the truck. He was wearing his overcoat, hat, and galoshes, and carrying a valise.

"Everything in good order, gentlemen? Lights timed to flash on and off at six-second intervals?" Amplifiers turned up to full volume? Steel-cased switch boxes provided with sturdy locks? Very well, then, lets's flip the power and be off. I'm going to impose on you for a lift to Boston, if I may. I have an urgent appointment there."

Every year I read this very funny Christmas-detective novel (it appeared in 1978 - if I'd count the way  Professor Shandy does that would be....?...times...)

The photo above I took yesterday evening - in Berlin they start their Illumination tradition too!