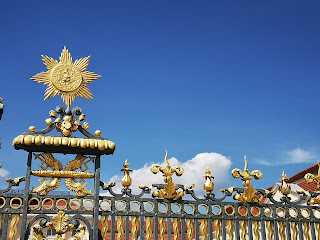 
So long it was forbidden ground for me - the lockdown draw a railing around my mobility - I could only go where I could - go. Felt like sitting in a golden cage.

Almost every day I walk about 10.000 steps - but that would be not enough to reach the Charlottenburger Schloss - Google map said: 2 hours walk to and fro - but then I wanted also to walk in the beautiful baroque park!

The Schloss became a symbol, a Fata Morgana, almost an obsession.

Yesterday, which was warm and the air was filled with the intoxicating smell of flowering lime-trees, I got plastered by that.
Got reckless (in a very cautious way: took my unsightly anti-virus-mask - I do have beautiful ones from van Laack, almost an accessory, but they are not so effective), took all my courage into my gloved hands,
- and for the first time since February I walked into the Berlin version of Hades, the underground: 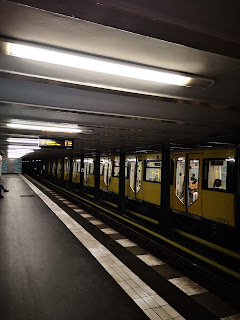 
As you see: not many people here! (I chose a time when people don't have to go to work).
I did not enter the nearest entrance, U Wittenberg Platz, because there is the luxury store KaDeWe, which is open by now and visited by many tourists. I also avoided the next stop, "U Bahnhof Zoo" (a very very bad station even in normal times, and a traffic junction, and a junkie junction..) but of course had to walk a long way to the (hopefully) "more harmless station" Ernst Reuter-Platz.

Only three stops later I was there - "there" means: again a very long walk through Charlottenburg (which I used to visit an acquaintance - the goldsmith Anne Rink - often a costly chat - yes,  yesterday too :-)  - meaning: I had to run back to a bank... and then back to her - but I wanted a symbol of my new freedom.

Then I had to recover from that, which I did by visiting one of my favourite cafés, Café Reet; 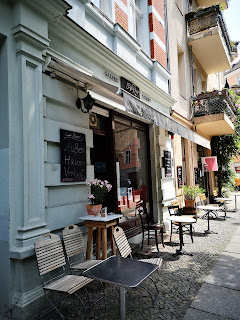 ... they have the most wonderful Tarte mousse au chocolate - which is not fat, I always wonder how they do it - it slightly crumbles in your mouth in the way cracknel crumbles, but very softly.
Thus strengthened I walked on.
And felt a bit like her: 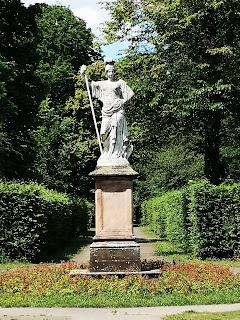 Minerva - or Athena - a statue created by the Dutch sculptor Bartholomeus Eggers (*1637 in Amsterdam, died 1692) - which stands now in the Charlottenburger Schlosspark.

Pallas Athena: goddess of wisdom, strategy and combat. I love her!