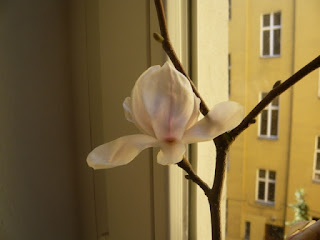 Now I am well again - a little feeble maybe after being sick from undercooling, as the blossom of this magnolia, but underneath I am still "steel".
I lost two kilogram and weigh now 59,4 kg - not so much for my 1.78m.
But one visit to the Netherlands will change that again... :-)

The film "Arthur & Claire", with Josef Hader and Hannah Hoekstra was a very funny, black comedy (nowadays they would call it "bitter-sweet") - two suicidal persons spending a night in Amsterdam.

"Do you always invade in someone else's room? Do you Germans still do that?" cries the young Dutch Hannah outraged, when Arthur enters her hotel room to hinder her to swallow an overdose of lethal pills.
"No idea", he replies, "I am Austrian."
"Even worse", she replies.

When she asks him why he choose the Netherlands and not Switzerland as country for legal assisted suicide, he replies:

"By no means I would die in Switzerland. There you will not even realize that you are dead."

Mmmmh, mmmhhh, mmmh. May be I should eat a cream tart to gain weight and glee. mirth and cheerfulness again?

But honestly: the movie was great! 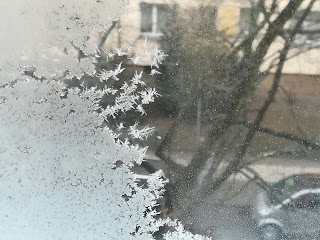 We have here minus 12° (or, as they describe it nowadays on the Weather App: "feels like minus 17°).

Can you imagine that at these temperatures the Netherland and the German Trains broke down on Tuesday. 1. March, (I came from Amsterdam) - a breakdown of energy - so we had to leave the train in Amersfoort, and stood there - hundreds of people! - for over an hour in the biting cold - without shelter, without information, and all they said was "There will some busses come to take you to Bad Bentheim".
The people: very civilized - the busses came not quickly one after the other, yet almost nobody pushed in rudely.
The busses brought us to - Apeldoorn. Out again.
Then a small train to Hengelo.
From there busses to Bad Bentheim - Germany. The only official person there saw us - and buggered off!! No waiting room for us, no toilets, no informations -  but half an hour icy wind.
Then came out of Nowhere a little train. Someone said: "Those who want to go to Berlin should leave in Rheine - a slow train will bring you from there to Hannover, and from there you can go by taxi to Berlin."
The distance between Hannover and Berlin is 286 kilometers.
And I said: "Oh no. I will not leave in Rheine. I go to Osnabrück and take a hotel there."
The others left the little train obediently in Rheine, I clung to my seat.
In Osnabrück it was weird: a station like a Hopper-painture - and a small empty glass-box in dark colours: the Information-Point.
I pushed the glass door. It opened!
Behind a desk hid a little man.
"Do you see any chance to go to Berlin tonight?" I asked him (more a rhetorical question, to be honest).
"Nah!", he said, and scrolled listlessly through his computer.
Then - after a pause - he exclaimed:

"I can't believe it. Never ever before has an ICE stopped in Löhne (40.000 inhabitants!) - but now one will. Take a little train to Löhne, you will catch it."

To cut a long story short: I did! Arrived in Berlin a quarter after midnight at the main station.
That was my very private "Miracle of Löhne".

PS: The ones in the slow train could not catch the ICE when it stopped in Hannover.

PPS: Although there were many, many trains affected by the breakdown of energy - in the Netherlands and in Germany - there was not one word in the newspaper about it. Which I think very, very strange...