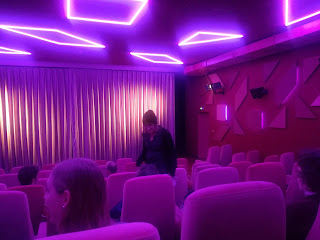 Berlin has a lot of cinemas - and I am so happy: I have a subscription that allowes me to visit all 12 Yorck Kinos (the photo you see above is one of the smaller 6 cinema halls of the newly built delphilux - smaller hall used to show films in the original English version) -  and a whole year long I can watch every film as often as I want.
(Come to think of it: I could almost give up my appartment... and the seats are very comfortable  :-)
I counted: this week just the Yorck cinemas offer 98 films - though of course in some cinemas they show the same films. (And if you find nothing that might please you: there are so many, many other cinemas in Berlin).
On Sunday, when I was in dire need of a pause, I watched "The Dark Hour" about Winston Churchill.
I was very moved - and learned more by watching than I had learned at school.
Although I read at the moment further "The Churchill Factor. How One Man Made History" by Boris Johnson, it was the fim that reached my heart.
Which was, of course, their intention.
Well done! 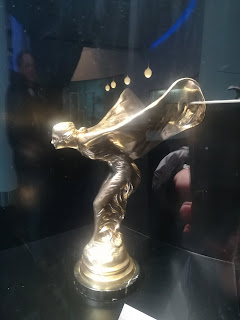 I am so happy: everthing was fine!

And now I feel as if I have wings again -

and there is so much time to choose from 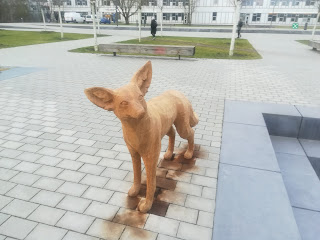 Only a few words, as I am occupied, having verbal exam on Monday - in Dutch...
Our seminar starts at 8:30 - yes: in the MORNING! - and over the term I witnessed the sun rising earlier and earlier. As I  ("I'll follow the sun" :-)
A few days ago something was different.
The wooden sculpture of a fox stands there.
Well-chosen for the aim of an university.
Wich reminded me of my old blog-titel - I frickled it into my header by now, to remind us all that we are both: "Witty and Pretty". ... were filled with learning: Dutch grammar, Dutch vocabulary, Dutch newspapers and Dutch books.
(And the after pains of the flu).
Today at the university we did our written exam, the verbal will follow next week.
So:
there was no time for ironing! 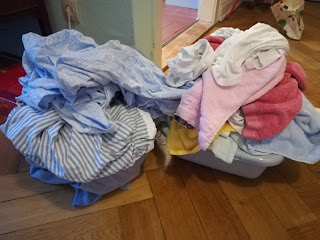 Worse:
there was no time for creativity! The gouache colours for my birthday (end of December): still not touched!

But soon life will start to become vibrant and colourful and exotic (and more orderly - that is what I call serenity..)
again. 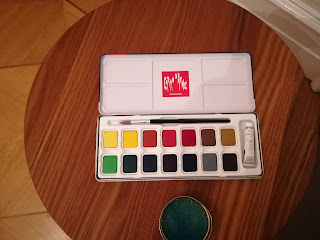