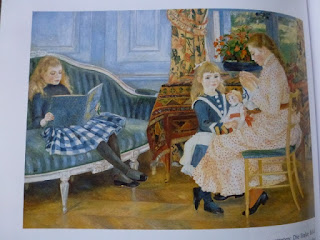 Dear You,
I love rituals. (As long as they don't become obsessive).
Sometimes you have to change them - your son has grown-up and stubbornly refuses to run around and collect hidden Easter-eggs in your garden, aggrivated by the fact that you don't have a garden anymore.
Then there are family traditions that the next generation continues (hurray!): the special Biedermeier-Korinthenbrot (currant bread) I baked for Easter is baked by our son in Bavaria now. 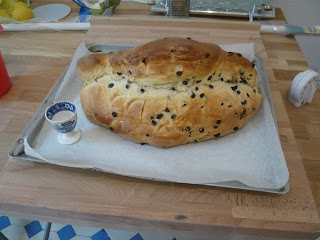 Then there are rituals that stop because a person is no longer there. Very hard for the remaining ones. You have to invent something new, otherwise your heart may break.
And then there are rituals that emerge by chance, or because you moved to another city.
Since December I have that wonderful cinema-subscription, which I really use a lot.
Every month on a Sunday at 11 o'clock they show a documentation about a painter.
Today (Good Friday is an official holiday in Germany) I saw:
"Exhibition on Screen - Barnes Foundation: Renoir - Revered and Despised."
Very interesting - the "despised" refers to his late work, where he was obsessed with fat female buttoms (not utterly rare in old men :-).
That he was all his life an awful convinced misogynist the critics had to tell me. Not that I care much - I look at his paintings, not the man.
Well - and my new ritual is:
after such a film documentation I go to the National Gallery (some days later). And look at the paintings they possess. They had one Goya. And they have three Renoirs (one photo from the catalogue you see above).
And then I look with "different eyes".