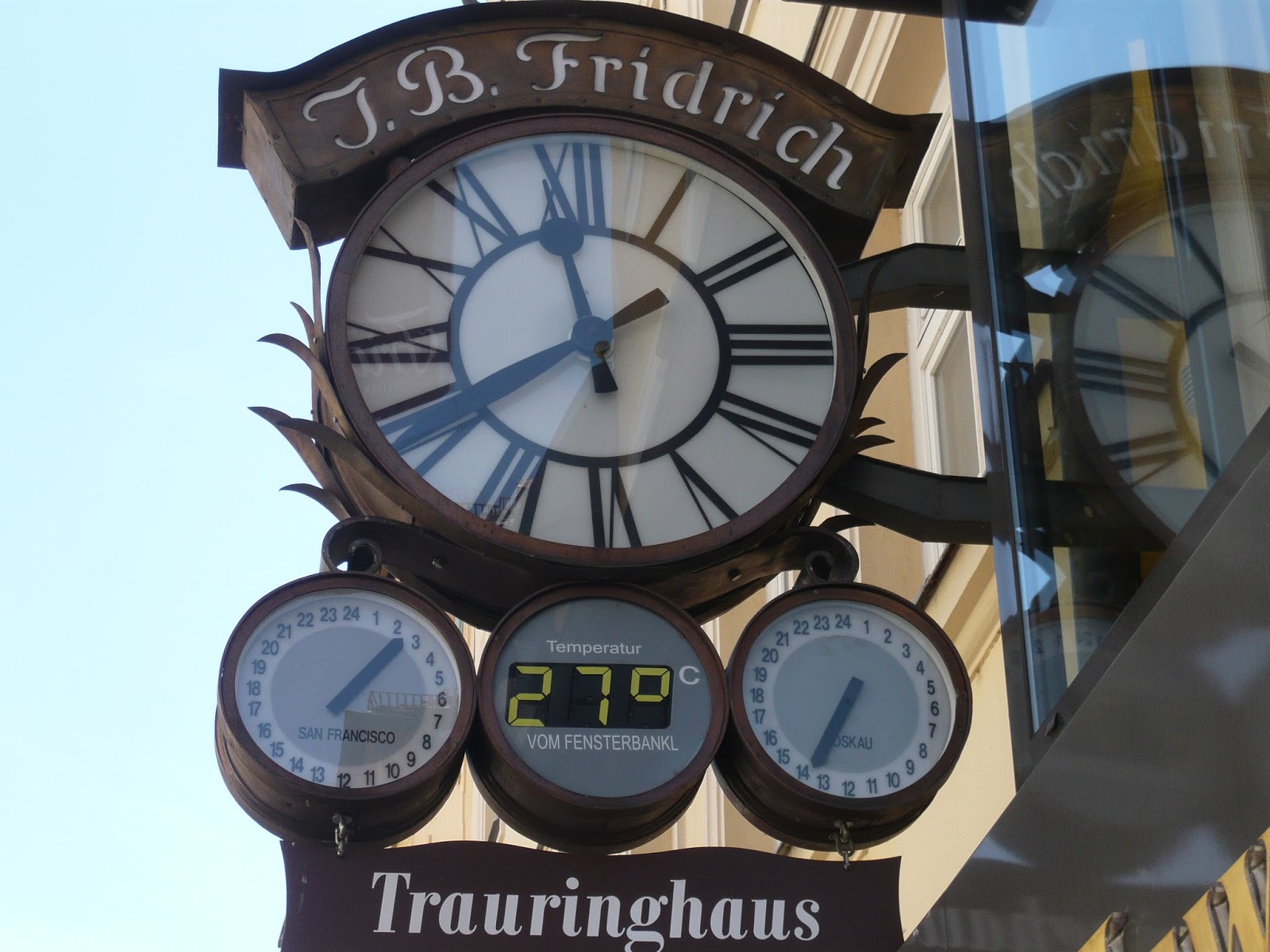 AGAIN!!! It happened AGAIN! I didn't grasp it - the change to summertime! Though I had your interesting English mnemonic  - "spring" and "fall" in mind.
Yesterday I even got a bit angry thinking (in advance) of it; being an early riser I thought: "Then it will be even earlier when I wake up". To my surprise it wasn't. Hahaha.
My little error in reasoning is why I didn't warn Husband, who had booked a berth in a sleeping car to go to Munich in the night from Saturday to Sunday. (He left from Hildesheim, I was sitting in my haziness in Berlin). But - being a man - it was all clear to him and he left in due time, without any channelling by me :-)
This morning (almost in a hurry - because it was - surprise! - one hour later than expected - but then: it was Sunday) I thought of former times, very far back, once upon a time, when due to the change to summertime I arrived to leave at Heidelberg station in wrong time. Errrgg sorry, shamefully I have to correct: "Twice upon a time..." And did I learn from it? Oh no, not I...
It is the same as with directions, but there I am not alone: my friend Anne - and many women I know - each time walk to the left when we stand in front of a station and our map pretends to direct us to the right. (I even invented a map for women - I mean: if I hold the man-made map upside down, it works... But then came Google-map, so I am still not rich).
Oh - Yes: I am able to learn very complicated words in Italian, as "frigorifero" or "abbassamento in chiave" (sometimes I even suspect that this 'abbassamento in chiave' might be the reason why I can't grasp the right direction) - but maybe, I think, the very reason for my summertime-change-blackout is that I am just utterly unconvinced that summertime change is necessary or helpful... and then I get stubborn... which is so utterly idiotic...(come to think of it: as is that change to summertime).
Alas! you know me, dear friend: I always make the best of it...
So I congratulate myself on being ...
... timeless...

(Though utterly punctual, I have to add - when I have adjusted my watch...)

Email ThisBlogThis!Share to TwitterShare to FacebookShare to Pinterest
Labels: change to summertime

Eulogy For A Tree Since we came to live in Berlin, it was there: the tree in the backyard.
Morning and evening, 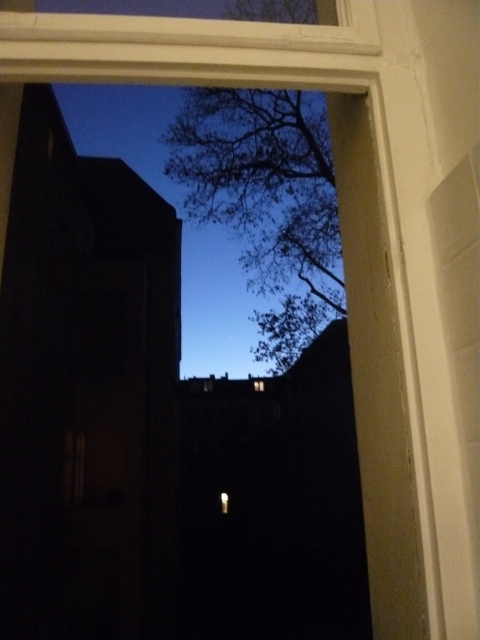 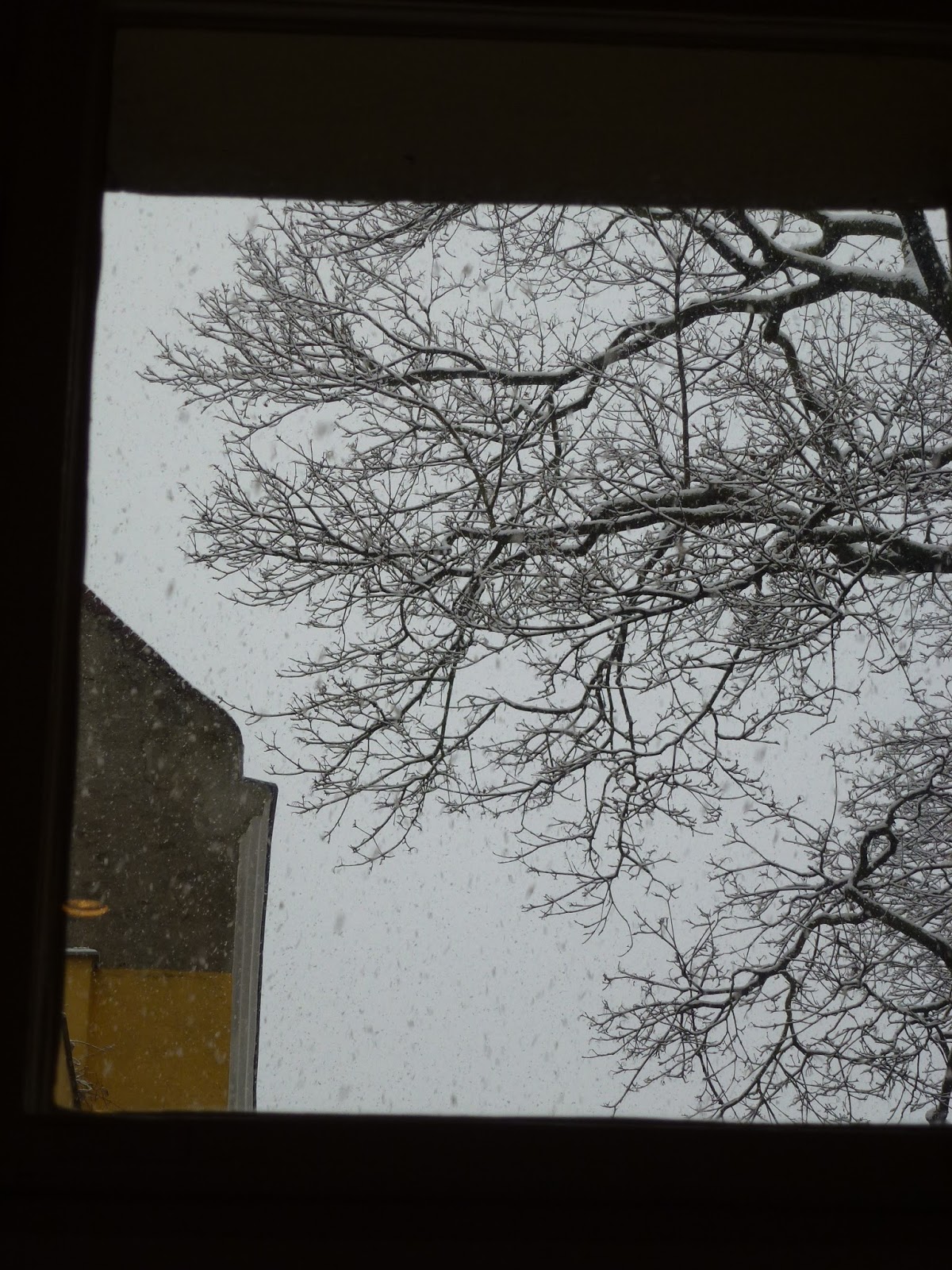 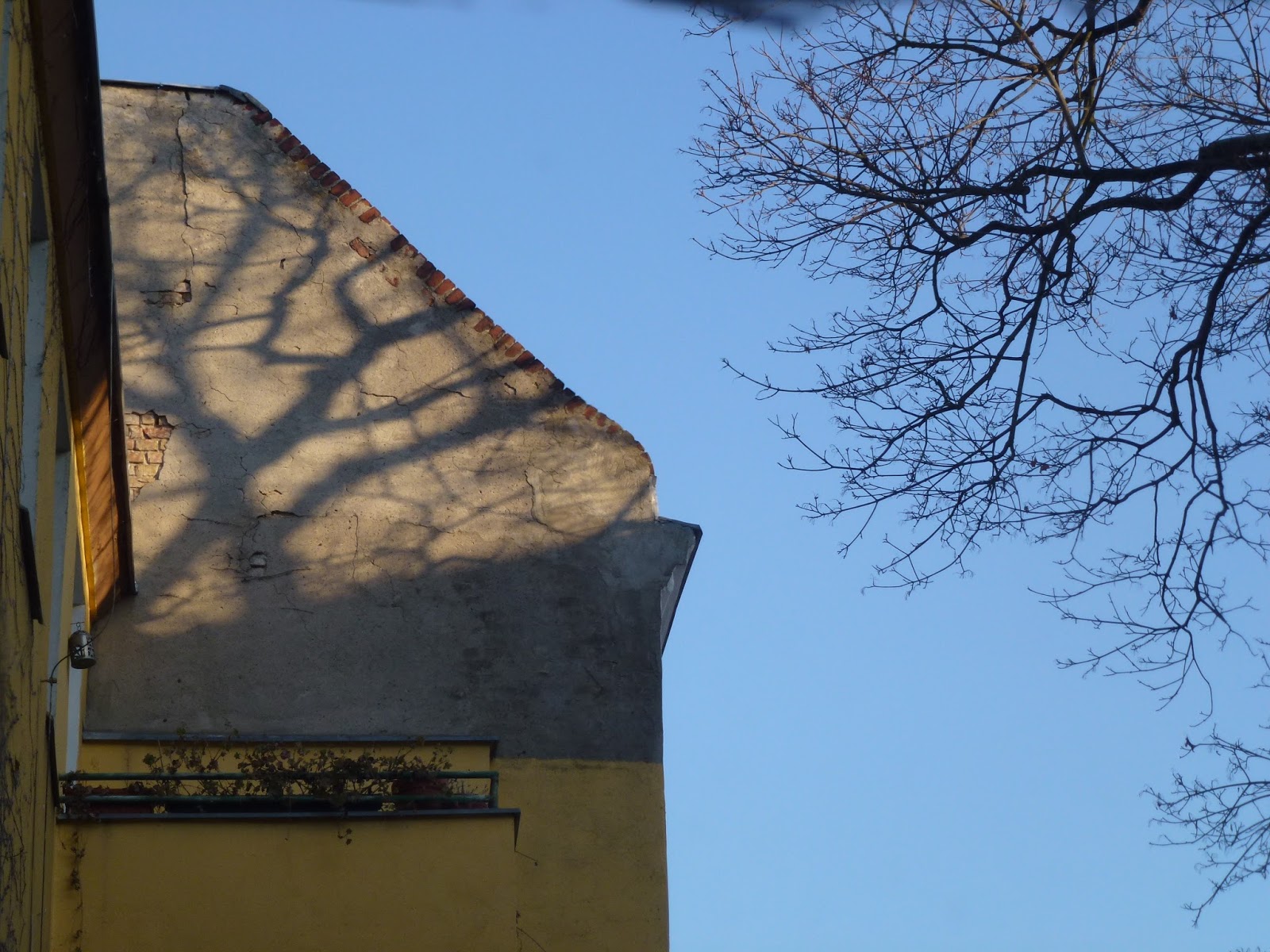 Yesterday I heard the chainsaw screaming in the backyard. Of course Robert Frost's lines sprang into my mind, but nobody listened when I howled "Out, Out!" -

"The buzz saw snarled and rattled in the yard

And made dust and dropped stove-length sticks of wood, (...) 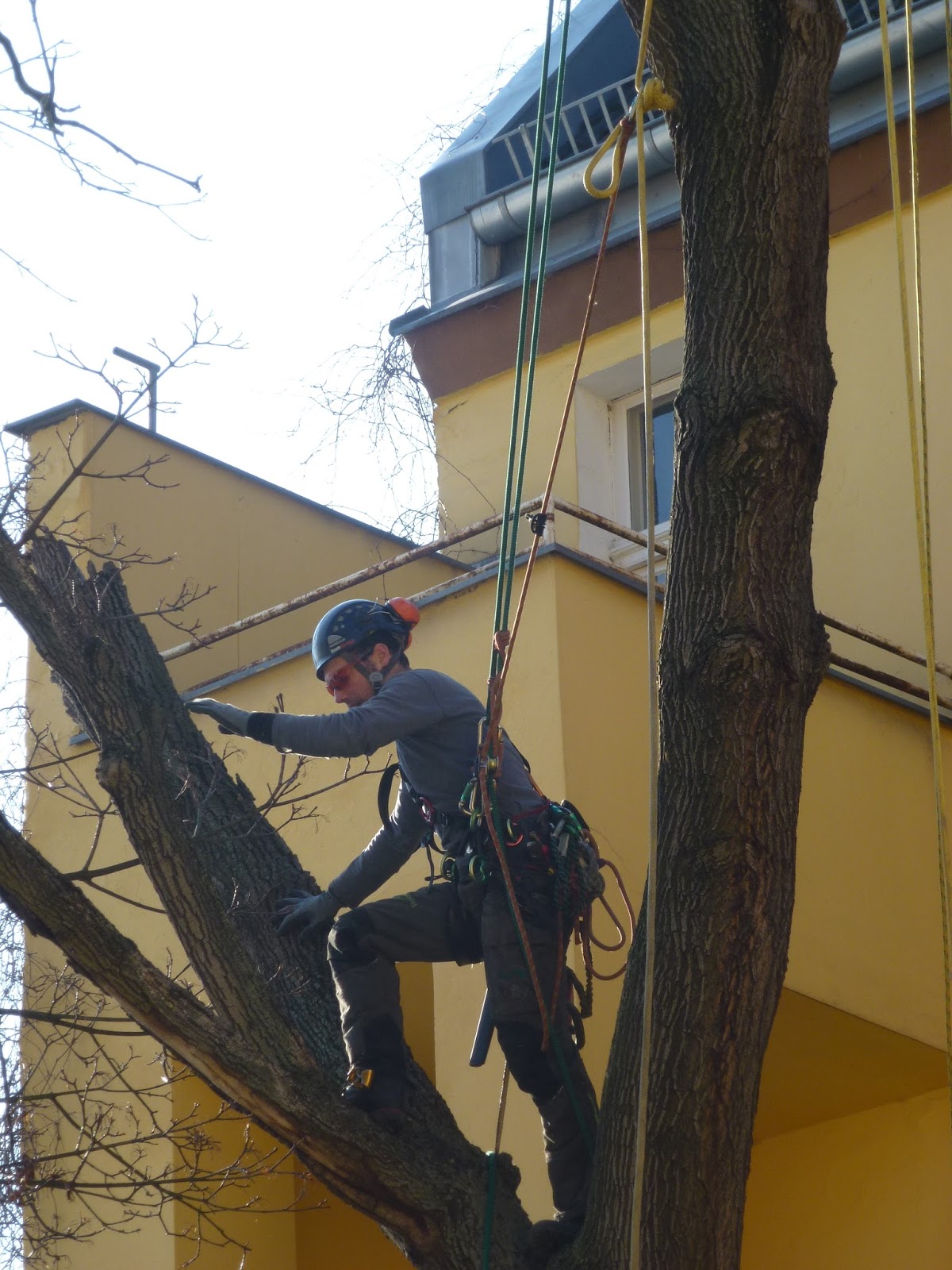 I'm not overly sentimental (I hope), and the renter will have had her reasons (two big branches had broken down over the years).

But I will miss it - it was the nicest sight the backyard had to offer.

Email ThisBlogThis!Share to TwitterShare to FacebookShare to Pinterest
Labels: Out - Out, Robert Frost

"Half she pulled him, half he sank yieldingly..." 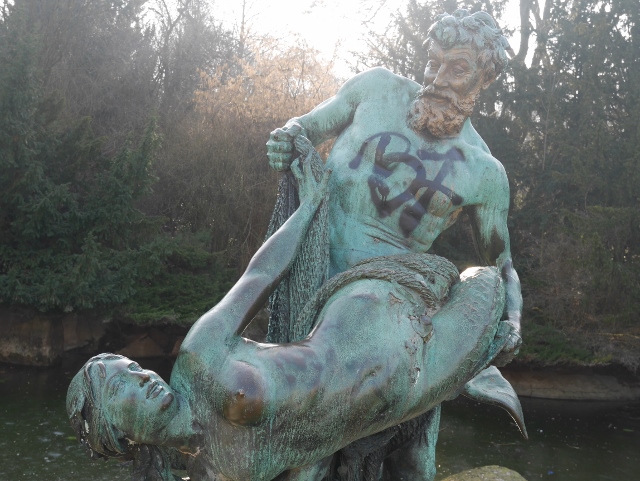 (Being always quite shocked by the translation Google offers for our Blog texts, I will try to give you a - hopefully - better version done by myself. Assuming that you are not that deeply interested in Berlin's city views and history, I shorten my German post a bit).
"Half she pulled him, half he surrendered..." (as I put it) is a quote from Johann Wolfgang v. Goethe's poem "The Fisherman" - maybe you like Karl Friedrich Curschmann's (18005 - 1841) version better: "half pulled by her and half sinking himself," he translated.
If you look at Ernst Herter's bronze sculpture - the title is "A Rare Catch" and it was created in 1896. it stands at a little pond bank in Viktoria Park in Berlin-Kreuzberg. . .you see that in his case it might be vice & versa. (I might even call it "Partners in Grime" :-) , because the mermaid and the fisher look both lewed).
So many German poems and short stories deal with mermaids, and all the other inhabitants of water and sea. I also love Oscar Wilde's story "The Fisherman and His Soul" - where the poor infatuated young fisherman tries to get rid of his soul to be able to live with the mermaid. And of course Frederick Leighton's beautiful picture, or Arnold Böcklin's.
There are a lot of interpretations of what the mermaid might be a symbol for - very famous is Carl Gustav Jung's "Archetype" with the devouring part of mother&woman - I would like to discuss it, but two day's ago was "International Woman's Day", and so I follow Hyacinth Bucket's (pronounce: "Bouquet") advice: "Leave it, leave it, leave it..."
The mermaid, not having a soul, is the eternal seductress; brilliantly depicted in Gottfried Keller's poem "Sea Fairy Tale" (again roughly translated by me):

(...) and kissed him the Red from his lips.
Three days she had diverted herself,
On the fourth she let the dead body
Glide out of her arms.
Then she shot up to the sunny light
And looked over to the shore;
With purple she made up her white face
And sang while drawing closer to the shore.

Not the nicest way to see women. (I might even be tempted to talk about Jung's "Shadow" now).
And not a good foundation for love... but to make a sacrifice of one's soul is also not a good option. To open up the heart: YES - let him/her in. To warm the other with one's love: YES. But don't take away the air to breathe, or the water to swim in, the elements which the other person needs to exist (but you don't, and might not even understand) - they should be accepted. How many people sacrifice their friends, their originalities, their aims when the lover just whistles once... One shouldn't: otherness is (and remains) tempting.
Otherwise it might happen that our dear prince of poets, J. W. v. Goethe, hits the nail right on the head again with another line of his poem: "and never was seen again." He speaks of the poor sinking fisherman - but we might take it as a metaphor for one partner devouring the other, wanting the sacrifice of his soul - and I know quite a lot of pairs where just that has happened.

At the Bottom of the Treacle Well...

Dear You,
Yesterday I made a few finger-exercises, wrote a blog post, then went to bed without publishing it - a good idea, as I saw when reading it again in the cool morning light (yes, it was early).
At the moment the morning air often has a very refreshing and cooling effect on my ideas or worries or projects I developed at night.
Normally I sleep through. Not at the moment, though I tried to follow all those well-meant tips from health-gurus for getting the sleep you NEED: the word alone makes me fret - can't sleep worrying about the amounts of sleep I NEED - yes, scientists explored it for the umpteenth time at a university in *** - though to read their simplistic stats MIGHT make me sleepy and drowsy, - better than a cup of Horlicks + the added bonus of Barbara Pym. (I like her - don't misunderstand me - but I find her very soothing too...)
There is a lot of dry humour in her novels - but maybe not everone will see it - as Tom wrote in a comment on my comment on innuendo (my sort of) - he said that maybe Google can't understand it (or were it the English men? Can't remember - but no:  that can't be, as extensive field research by Dear Me showed in clear results: they Do understand. So he must have meant Google).
Being quite chirpy at night, I feel like Lewis Carroll's Dormouse in daytime. Maybe I'm a victim of "spring fever" - is that the medical term - or is it "springtime lethargy"? (Too lethargic to look it up).  Lethargy, I feel, is right here, cuddling me in his soft grips - though spring is still nearing. The air changes: some soft notes lure and purr under the crispy cold in the morning, and the singing of our alpha blackbird is getting even more combating and challenging.
Well - I think I shall publish my blogpost quickly. Now. Otherwise - if I sleep about it over night, the cooling effect of the fresh morning air tomorrow will nipp my Darling Buds of May again.
Well: we only have March. Might go to a Mad Tea-Party. Visit the March Hare.
"You might just as well say," added the Dormouse, who seemed to be talking in his sleep, "that 'I breathe when I sleep' is the same thing as 'I sleep when I breathe'!"
"It is the same thing with you," said the Hatter, and here the conversation dropped (...)

PS: "You shouldn't make personal remarks," Alice said with some severity: "it is very rude."
Right she is...