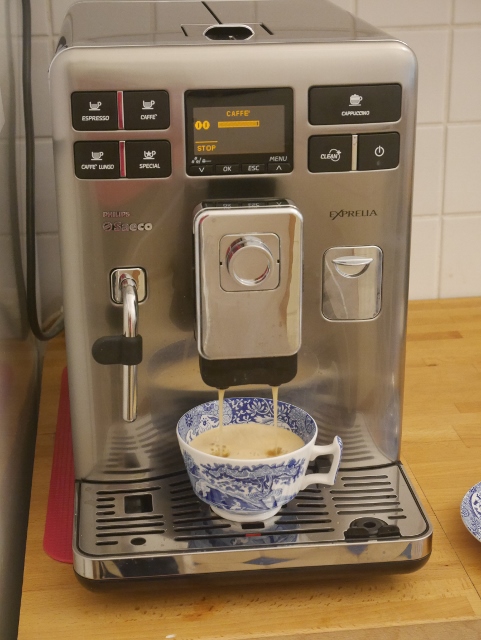 A 'domestic animal' - in Berlin? Even if you call it a 'house pet' it would not be happy here: only one big balcony (l)imitating nature, a flat with many square metres, but on second floor, so you won't draw a dog from the woodwork with that...
Instead I bought a pet machine. A sort of Tamogotchi. (You remember the Tamogotchi, created in the late 1990s, a virtual chicken that needed as much attention as a real animal?).
More precisely: I just asked for a coffee machine, a good one which can make coffee, espresso, cappuccino and latte macchiato. Till now we had a Nespresso machine, which worked quite nicely. (We started drinking coffee only a few years ago - and Nespresso even did an interview on TV with me, but I think some of you still have to wrest yourself free from 'Roger Moore and I', two posts down, so I will spare you this one).
I wanted to wrest myself from Nespresso. It started so harmless:
I only wished to recycle the Nespresso capsules. In the Nespresso shop - which is very handy in the emporium KaDeWe six minutes away - they gave me - reluctantly - a solid brown plastic (!) bag.
When I saw at home how quickly it filled up, I thought: oha!!! (This German cry of astonishment might best be translated to: Wow!)
Then this woman started to calculate: one capsule costs 39 cents. If we buy (very good) fresh coffee beans, we will have generated the price of the 'Porsche among the coffee machines' depicted above in two or three years (don't try to prick a needle into my little bubble's daydream: contrary to my normal behaviour I even bought an assurance for the machine).
So I bought it.
Husband arrived with Knut, my little red Fiat 500, and schlepped the machine to the car.
And that was the first time I should have become suspicious: I had to walk back, while the machine was driven home comfortably!! (the big box with the coffee machine refused to take a place in the backseat).
At home La Macchina got unpacked. I read the user's guide. Carefully.
Not much to read - mostly lovely pictures. Drawn like a comic. I proceeded to action.
Espresso: wonderful! Cappucchino: bellissimo! Then I got daring and tried my luck on Latte Macchiato.
At that moment the wild animal in the machine woke up.
First error of judgement on my side: it was not the Imposter of House-Pet-Dog  - which I thought at first and thus tried to house-train by stern discipline to show it who is The Master ( = Me).