River Flows In You - the Trip on a Narrowboat (Part 1) 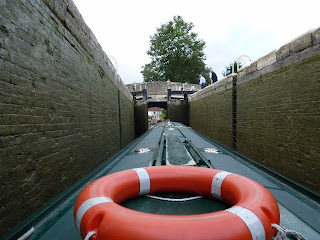 'My houseboat,' Hodgkins said.
'Your what?' I asked.
'Houseboat,' Hodgskin repeated. 'A house built aboard a boat. Or a boat built beneath a house. You live aboard. Nice and practical.'
Tove Jansson, The Exploits of Moominpappa

Catch your dream of a houseboat trip on an English canal - and you'll drop out of time.

Yes, I'm back, my friends, but not quite - still walking a little bit above the ripple of water and waves (and fine English Ale).
Though a houseboat is not as contemplative as everybody predicts.
I didn't write a line, I didn't draw even one picture, I didn't read anything.
I just WAS. THERE. In the very moment.
(You had to be - otherwise you would bump your head at the beam of the small entrance door, or trip over the kerb of the boat - and the water in the canal was looking not that inviting...)
Now I'll give you a super-boat-trip-recipe:

You need
- up to 10 people (best when some children are among them, for a while)
- travel (Holly Go)lightly
- bring a little bit of sunshine with you
- though no driver's licence is needed (why should you? The narrowboat is only about 72 feet (= 22m) long, so who cares?) - it is good to have a person who has done it before - we all accepted our captain Matti - and in the best of all possible worlds he will - as he is - also be a connoisseur of beers - Real English Ale - fruity beers, spicy beers, soft beers, and wild beers (I'll come to that point later, Yours Truly announces with the Cheshire cat's grin on her face.)
- You know you are among the chosen few if you have some excellent guitar players among you, a sweet ukelele, a spectacular drummer, a great saxophonist and some singers - solo singers and background singers, all are welcomed - THEN THE BOAT WILL ROCK!
We had all we needed: a tiny kitchen, 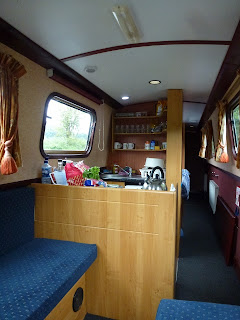 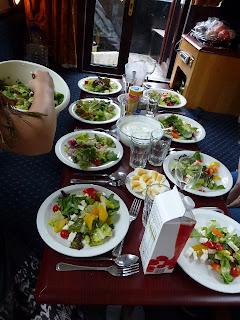 beds, two toilets and one shower (but let's keep quiet about the hair"blower", which got its "energy" from a car cigar jack...). Though I saw an alternative offer on the canal, 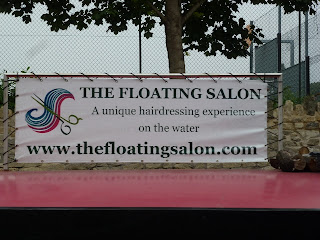 I decided to go to a solid hairdresser in Devizes.
- and we had pubs (which the French friends on the boat called in their charming French accent "pöb" (as the 'ö' in 'further') -- and for the rest of my life I will always be much more drawn into a 'pöb' than a 'pub'.
All along the canal they invited us: open doors, fancyful decorated, and offering the widest variety of Real English Ale. 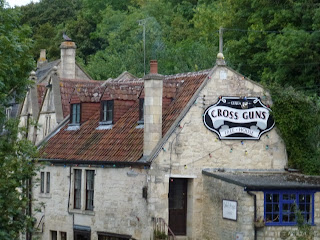 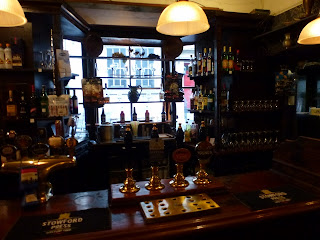 - And the landscape: you sit and look at the meadows that slowly slide by your side, the cows look dreamily back, the swans and ducks follow your boat, and the boat people-neighbours are oh so friendly. 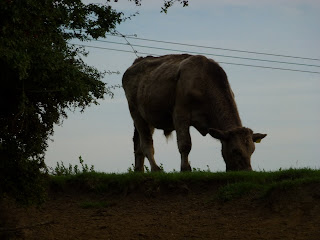 But life isn't - as every Wayward Taoist knows - only milk and honey - it is Yin and Yang: meaning: locks and swing-bridges. 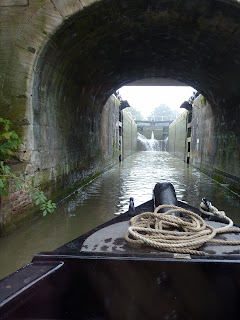 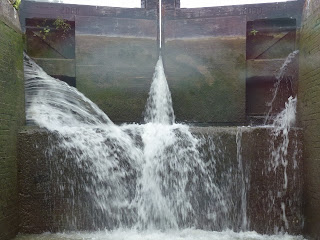 Locks are very, very hard work (as I learned on that day when we were only three people) - after 7 locks I and my knee knew what we had pushed (and please remember: I am the woman who in the fitness studio proudly pushes easily over 140 pounds on the leg press...)
First you have to open the lock gates, klink, klink, klink, then the narrowboat enters (did I tell you that it is 22 meters long? A normal lock is 22m and 10 cm long - you just fit in). Then one has to close both sides of the lock gates again - the water rushes in (All windows and doors closed?!?)

To prepare breakfast in the morning for ten people is a challenge - one of us even made "French toast" twice, joyously accompanied by the shrill F sharp major of the fire alarm.

While you are anxiously waiting if  our maritim engineer (we really had one among us!) will find a way to stop that infernal alarm shreeks, I use this thrilling moment to take a little break - see you soon.

Email ThisBlogThis!Share to TwitterShare to FacebookShare to Pinterest
Labels: English Real Ale, narrowboat, River Flows In You by Yiruma