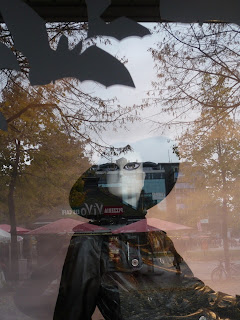 The last day of October - might I send you a postcard to Halloween?
"Isn't it weird?", asked husband - who is a connoisseur of many things, but not of nature's wild life, "that today I still saw a swallow in the backyard?"
Weird indeed - because it was a sweet little bat - fluttering in her inimitable soft-hectic loudless way through the twilight.
Are you in the mood already? Or are you like the youngest son in Grimm's fairy tale: "Von einem, der auszog, das Fürchten zu lernen", "The Story of a Boy Who Went Forth to Learn Fear"?

A father had two sons. The oldest one was clever and intelligent, and knew how to manage everything, but the youngest one was stupid and could neither understand nor learn anything. When people saw him, they said, "He will be a burden on his father!"
Now when something had to be done, it was always the oldest son who had to do it. However, if the father asked him fetch anything when it was late, or even worse, at night, and if the way led through the churchyard or some other spooky place, he would always answer, "Oh, no, father, I won't go there. It makes me shudder!" For he was afraid.
In the evening by the fire when stories were told that made one's flesh creep, the listeners sometimes said, "Oh, that makes me shudder!" The youngest son would sit in a corner and listen with the others, but he could not imagine what they meant.
"They are always saying, 'It makes me shudder! It makes me shudder!' It does not make me shudder. That too must be a skill that I do not understand."

May I help you? Learning that skill?
As I love the poems of Annette von Droste-Hülshoff (1797 - 1848), and couldn't find a translation, I did (roughly - come on, we have Halloween - and I have to get that damned bat out of my hair!) one for you: