Susan Caines - Finds on a Flea Market in Devizes 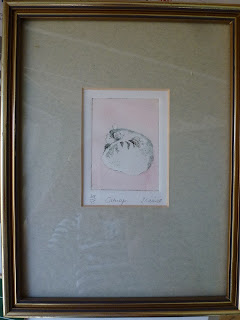 Today only a 'quickie', I'll travel to Bremen tomorrow and still haven't packed.
When we stopped our narrowboat in Devizes, I had the chance not only to view the impressing Norman church tower and a beautiful medieval house (and the brewery Wadworth, of course), but also the 'Flea Market & Collector's Fair', and as always I bought what I liked. The picture above shows a daintily etched cat - beautifully framed by the artist herself. (The colours are more beautiful than here). It is no. 38/75  of   "Catnap." Signature: "S. Caines".
On the back of the frame I found Susan Caines old address and telephone number in Bristol.
"Well", I thought, "I like it. It costs less than a coffee in a coffee shop. If it is worthless, it doesn't matter: I will hang it as a signal that I take just that: "A catnap" (which I seldom do).
At home I learned that Susan Caines belongs to the 'Bath Society of Artists' .
In 1995 was elected a member of the Royal West of England Academy of Art and in 1999 was given a show at the R.W.A Galleries. At around this time became a member of the Bath Society of Artists. Moved from Bristol to Brighton in 1995.

And the second thing I found (beside beautiful old postcards from British parks) are these: 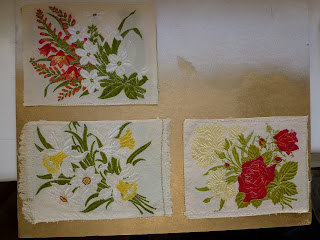 There were 100 of free woven silk flowers - given as a free gift of in the 1930's with Kensitas Cigarettes. I bought these above (put them here on a paper) on the cheap.
Sometimes I surprise myself by my strange actions: imagine: I, as a true lover of flowers - I could have bought about 40 different designs. And what did this women do? Well - you might notice that I brag sometimes (wait for my next post!) - but deep inside I am was a shy person, and modest (don't give a snigger!). So I thought: I cannot be greedy. Others will enjoy them too. I'll take the three I like best. That's it.
And that was it. (We had a car! I had the money! But no...)
End of the story.
And I love them dearly: so beautiful. Almost  No remorse.