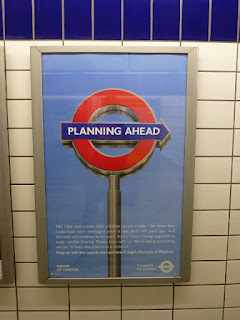 As I am going to London next week, today I will only give you a part of the hilarious "The Diary Of A Provincial Lady" by E.M.Delafield -  (another part on Sunday) - to show you my mood and my amusement of watching myself...

July 17th. - Robert sees me off by early train for London, after scrambled and agitating departure, exclusively concerned with frantic endeavours to induce suitcase to shut. This is at last accomplished, but leaves me with conviction that it will be at least equally difficult to induce it to open again. (...)
Arrive at station too early - as usual - and fill in time by asking Robert if he will telegraph if anything happens to the children, as I could be back again in twenty-four hours. He only enquires in return whether I have my passport? Am perfectly aware that passport is in my small purple dressing-case, where I put it a week ago, and have looked at it two or three times every day ever since - last time just before leaving my room forty-five minutes ago. Am nevertheless mysteriously impelled to open hand-bag, take out key, unlock small purple dressing-case, and verify presence of passport all over again.
(Query: Is not behaviour of this kind well known in therapeutic circles as symptomatic of mental derangement? Vague but disquieting association here with singular behaviour of Dr. Johnson in London streets - but too painful to be pursued to a finish).
Arrival of train, and I say good-bye to Robert, and madly enquire if he would rather I gave up going at all? He rightly ignores this altogether.
(Query: Would not extremely distressing situation arise if similar impulsive offer were one day to be accepted? This gives rise to unavoidable speculation in regard to sincerity of such offers, and here again, issue too painful to be frankly faced, and am obliged to shelve train of thought altogether.)
(...)

Email ThisBlogThis!Share to TwitterShare to FacebookShare to Pinterest
Labels: E.M.Delafield, The Diary Of A Provincial Lady