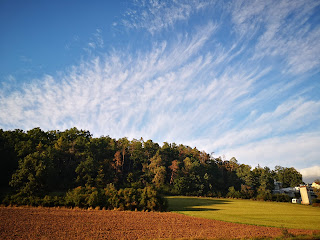 Feel the Fear and Do It Anyway (1) 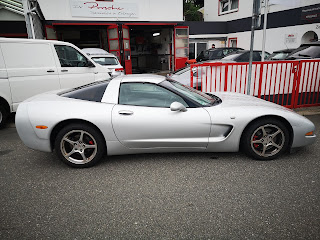 I always loved this title of Susan Jeffers' little book. And had to recall that encouragement when in Bavaria I suddenly had to drive again. That beautiful car above - a Corvette, which belongs to my son.

You might remember that I sold my last car, the cute little red Fiat 500, Knut, because in Berlin I decided in a very environmental mood that I don't need a car: so many subways, busses, trams and S-Bahnen!

Had I but known...   Covid was putting a stop to all public transport - almost nobody dared to use it. Thus the radius of my movements for a long, long time became awfully narrow - you know I walk easily 10 km, but you have to divide that by 2 - otherwise you can sleep in the subway :-) After getting the vaccine I became mobile again by public transport. When I had to drive the car above, I hadn't driven a car since five or four years.

I had no choice: to help my son (he waited at an auto repair shop in a city where he had brought the second car, my DiL's Porsche SUV) I had to drive it - this beautiful car!

I felt timid. Would I be good enough? And could I drive with an automatic? I had always looked down on that, I love stick shift, still think it more sporting. Never had owned an automatic - though I had at least 7 or 8 cars in my life, almost all big and quite quick - my "best" were two Lancia Beta 2000 - and big Volvos, big Audis, etc. I have driven a lot in my professional life. (Later, in the sensible little Fiat 500, I didn't feel safe).

Well: I arrived well and excited. LOVED IT.    (And had the courage to drive the big Porsche SUV too - here the landscape is hilly - which is a real excuse for the petrol it needs).

For the Corvette I can't find but one: it is so utterly beautiful!

And I loved the (only possible) reaction of my gay young friend Michou: he texted me: "What did you wear?"     :-)

Email ThisBlogThis!Share to TwitterShare to FacebookShare to Pinterest
Labels: Corvette, Feel the Fear and Do It Anyway, Lancia Beta 2000, Susan Jeffers 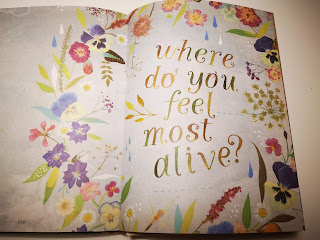 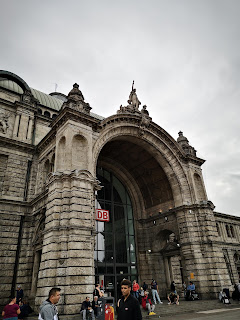 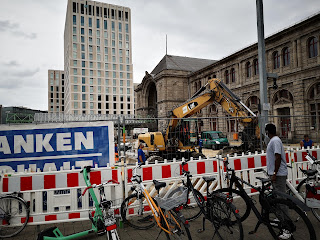 I called my son.
To make a long story short: he saved me, arrived accompanied by The Three Graces, who enjoyed the ride immensely, sitting in their new children's seats (one barefoot, one with one shoe, one in socks - you might be able (though I doubt it)  how long it takes to put on socks and shoes to the feet of very lively young women who just became gorgeous two years old).
So: here I am. back in Bavaria - in my little Apartment With a View - and am HAPPY.
Though I am happy in Berlin too - in that melting pot of everything.
So: I cannot answer the question above.
And, come to think of it: Why should I? One of the big lessons I still try to learn is the Buddhist wisdom: "Thou shall not judge."
I try.
Posted by Britta at 06:45 22 comments:

Back in Berlin Again - for a while... 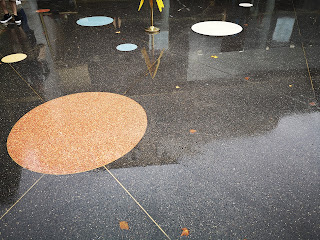 This photo of the ground in front of an old (now renovated) beautiful cinema in Berlin I took a week ago - as you see: the design is clearly Fifty's.

To me it is a symbol of my life: hopping around from place to place: much fun, but also: no roots. Arcadian life in Bavaria - Rush Hour in The City.

When we arrived here last week (No Italy !!! - we had to change plans and spent a week in Bavaria, and then a week in Berlin) - it was still raining - but now we have beautiful weather (for a while).

Instead of Florence there was Berlin, instead of Tuscany we visited Brandenburg - hahaha. (But that was nice too).

The Flying Dutchman sits in his car now, heading back to the Netherlands, and I will spend another 10 days here - then hurry back to my grandchildren, the triplets, who just became 2 years old. 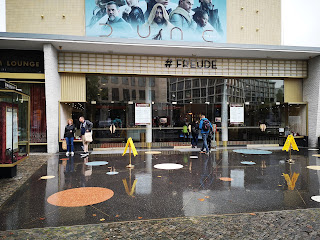 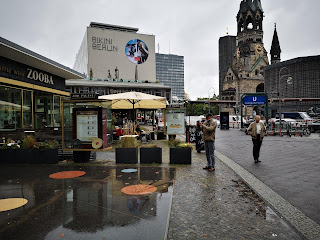 PS: There is Life again in Berlin - but still far away from Rush Hour...