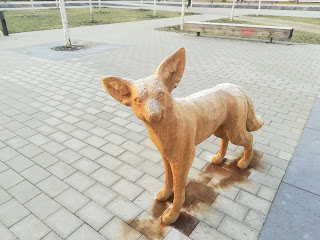 Since October the new semester at the Freie Universität Berlin - short: FU - has started.
As you know I do "Dutch studies" - the philology of the Netherlands -so  I learn Dutch as a language, but also about history, literature and linguistic analysis.

Learning the language comes easy to  me (though of course I have to work a lot - but I enjoy that). Sometimes it is confusing - e.g. when I search for my blog for an English word - but Dutch turns up! (Which reminds me of the fabulous short story Cicerone by Atte Jongstra. He is a postmodern Netherlandish poet, who in that story compares his brain to a warehouse, where the salespersons run to bring him his memories - but they are sometimes unruly - take a long time, get lost in the storeys or the cellar, or turn up deliberately with other items than those he asked for.
Postmodernism wants to show that language or a text is not "plain truth" - every reader puts his own interpretation into a text.
As we all know when we talk to someone, or write something, and are misunderstood. (N'est-ce pas, Tom?)

Arriving at the university on an early (very early) crisp November morning is bliss.

And I am utterly proud (and have to brag a bit about it) that I connected easily with the young students (I was the only silver-back among 22 young people, the oldest (haha) of them being 25, the youngest 18).

That is one of the big nice surprises in my advanced life!

The wooden sculpture of the little fox which you see above - and which I love as a symbol of "intelligence" - has gone. Vanished.
(I will not overdo it - but it reminds me of a book by Cees Nooteboom: 's Nachts komen de Vossen" - "the Foxes come at Night". I hope this one does it too! )
So the campus looks in the early morning a bit void - but still beautiful. 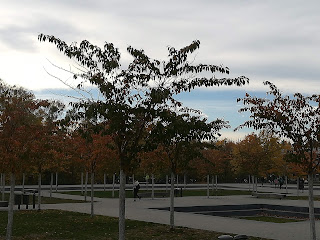