I Believe in What I See 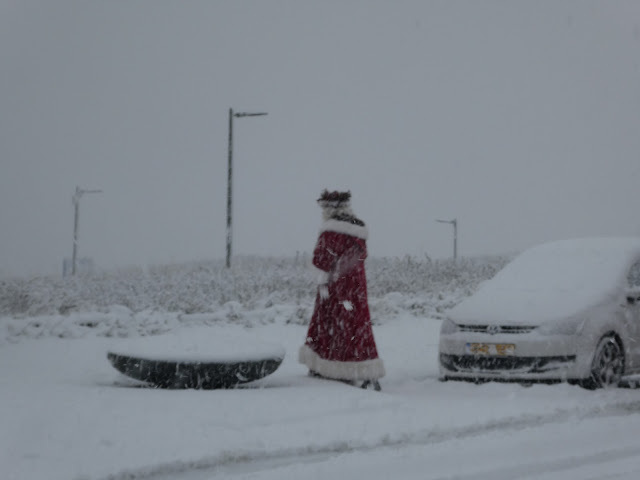 I always knew: HE REALLY EXISTS!

Admitted: he works under a few aliases - in the Netherlands he calls himself SINTERKLAAS, and as a man with a full agenda he visits the children earlier than in Germany or Great Britain.
Netherlanders will not tire to tell you about their historical influence in America - think of Niuew Amsterdam (later changed to New York) - and so you will easily see the metamorphosis from Sinterklaas to SANTA CLAUS.

In the Netherlands he arrives at December 5th, and he comes in a steamship from Spain - in pakjesboat 12.
His companion is de ZWARTE PIET (the Black Peter) - and in our hyper-politically-correct time poor Piet (being black and stereotyped) has a lot of hostilities to endure. He tries to convince his adversaries that he is only black because he comes through the chimney, and only all that soot, this fine particulaired matter, is blackening his face, but a lot of grown-ups shout: "Don't pull that black wool over our eyes!" The Mayor of Dordrecht, where Sinterklaas' boat landed this year, manly forbade a demonstration against Piet.
(Nothing new under the sun: in Delft (Netherlands) in 16th century all Sinterklaas-festivities were prohibited. But then, in 19th century, the man in the red cloak with those cute silky white long curls was everywhere accepted, and utterly loved by the children).

My childlike soul still believes in decency, trustworthiness and uprightness.
And in love.

And so it is no surprise that I saw HIM:
Sinterklaas walked through the heavy snow that fell on the Netherlands (as in England).
Walked towards the North Sea to his ship.
And: He was alone.
I could not see de Zwarte Piet.

But then, admidst the heavy snowflakes, a second person materialized - and I understood: SINTERKLAAS, the saintly and sly old fox was so much smarter than his adversaries!!! 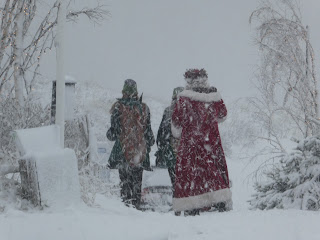 I wish you a Merry Christmas and a Happy New Year!

How to Catch a Dutch Owl (so necessary in December) 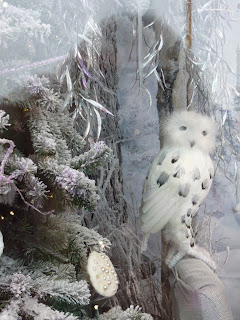 for me one of the most fascinating aspects of learning a new language is that it allows me glimpses into the character and poetic heart of another nation and culture.
The idioms, the proverbs, the sayings - daily life dances in new clothes!

So I learned a lot Dutch expressions for "THE NAP". (An endangered pleasure...)
Of course you can use the common word: "een dutje" - BUT: how much more vivid and colourful is the older phrase: "een uiltje knappen" - and though the experts quarrel about the first meaning (maybe something with catching a "butterfly"), there is no denying that "uiltje" is the owl that the exhausted man or woman is trying to catch... feathery...soft...tiny...and evasive...
There are many more ways to say (or hide) how you will spent your time after lunch -
but even my Dutch docent was flabbergasted when I served her my finest find:

To write an ENGLISH letter (or better: write a letter in English)
is evidenty such a difficult affair

that absolutely nobody should dare to disturb your concentration!