How to Stay Slim on a Full English Breakfast 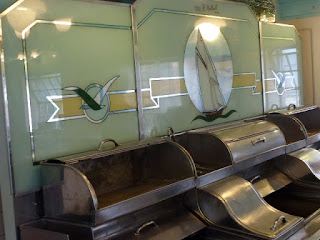 Dear You,
what do you think: will this title allure masses to my blog and thus raise my Stats?
My waist survived not only many Full English Breakfasts, but also a lot of tests of hoppy, fruity craft beers and loads of fish and chips too.
The secret? The godsent antidote?
That was our friend Mark Hanna. May I quote:

"Mark Hanna is co-author of our cruise cookbook, Greens and Grains on the Deep Blue Sea, and head chef for Holistic Holiday at Sea (...). Mark began his education in macrobiotics in 1978, and started cooking throughout North America at macrobiotic centers and summer camps, yoga retreats, Buddhist retreats, and natural food restaurants and cafés. During that time, he developed a creative approach to the normally austere macrobiotic cuisine. In addition to serving as the head chef on Holistic Holiday at Sea cruises, Mark travels throughout the world, cooking for events of all sizes."

Mark cooked for hundreds of people on cruises, so our narrowboat's tiny kitchen (which here looks tall - a well-known phenomen to all those who ever booked a hotel-room) - was no problem for him at all. 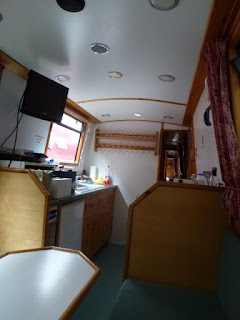 He was helped by Christian, who had learned from Mark to cook the macrobiotic way - and their dishes were so utterly delicious that we all - all the men & I - never missed meat or cream or whatsoever then.
We lived on a 2:1 - diet: 2 parts full English, one part macrobiotic.
So I think The Secret is alternation:
Matti sat in a fish and chips restaurant with a plate filled with half of the allowed fishing quota of the North Sea - in batter - saying: "This is what I call a correct portion!" - but then, another day, we all enjoyed our greens and miso and tofu (dressed up as meat. That is one thing I cannot understand about vegans: why do they try to form deceiving sausages, shrimps or burgers from tofu? Why not just call it 'honest tofu'?)
Well - I'm no vegan. Though I almost (!) became one when in Beamish I met this utterly friendly pig - 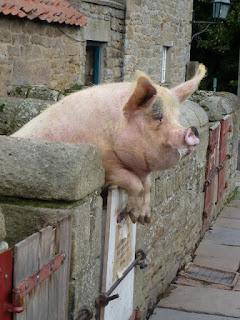 He leaned over the garden gate in quite an elegant way, swaggering a little bit on his tiny feet, blinking blue eyes under blonde eyelashes benevolently and trying to make friends with us - an effort which toppled him almost over that garden gate...
Back to diet-secrets: you can get away in life with quite a lot, I think - as long as you a) enjoy it with all your heart (and stomach); b) know your own limit c) enjoy change and d) do it in style.
Style for fish & chips you see on the first photo of this post - taken in Beamish, the exciting open-air museum.
At the end of a long walk through pictorial English history (and a side trip into the sweet shop) 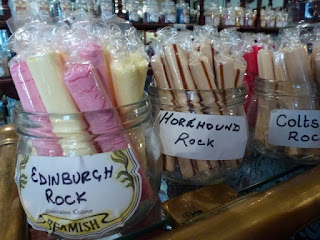 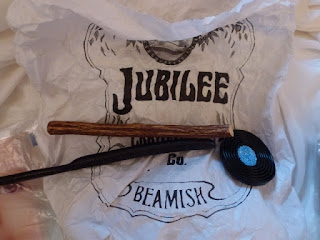 I entered the museal fish and chip restaurant - on my own, my friends sat outside on the green, testing another fruity hop brew.
Inside a young lad asked what he could give me, and I said: "Nothing , thank you - I just want to look at your wonderful Art Deco fish and chip machine."
"Oh, but you MUST try them!" he cried out, "I'll bring you some for free!"
A deep voice from an elderly colleague came out of a corner "THAT  you have to accept - THAT he is not doing for everyone, love!"
So I tested them - wonderful!
And we started to talk shop, about those fascinating Art Deco machines, and the very crisp chips:
"They remind me of some chips I got in Hastings", I said, "and their secret was the special fat they used... let me think: lard, it was."
"Yes yes, he cried, "that's what I use here too!!!"
So: choose quality. Don't overdo it. And enjoy.

PS: Next post I'll try to start from the beginning of our narrowboat trip :-) 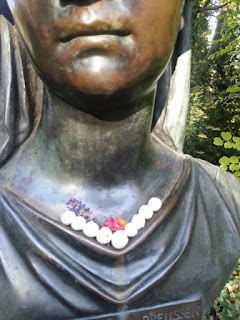 Dear You,
inspired by Rosemary's blog "Where Five Valleys Meet" http://wherefivevalleysmeet.blogspot.de/2015/10/return-to-rousham.html  and the first of her gorgeous photographs I 'republish' a little story from my garden blog "Britta's Gardening in High Heels". (The next post will be on the narrowboat).


I sit in our garden in Hildesheim with a cup of tea and enjoy the sparkle and twinkle on the silky threads of the spiderwebs, glistening against the sunlight. When the air moves, silver and gold flash up.
Horizontal nets are spanned in the big box ball standing beside the rose arch, looking like miniature versions of the Olympic stadium in Munich.
Delicate silver gossamer, elfine trampolines.
They are better visible than the golden spider-webs that hang between the rose-twigs.
When in the morning hundreds of dew drops hang inside them, drawing the spider threads down like heavy jewellery and throwing out sparks in the sun, they could jauntily take part in any contest of jewellers.
Yes: Today I’m having Breakfast at Tiffany’s.
For that breakfast the spider is waiting, too, though for her a less sparkling day would promise more booty.
“Nothing is so finely spun/ it will come up into the sunlight” wrote Theodor Fontane in “Under the Pear Tree”.
But sometimes The Good needs a lot of time to triumph, and before the victims have discovered the gossamer it is too late for some of them: the sticky threads attach themselves around delicate wings, and by attempting to flee in panic they only entangle themselves deeper, till finally the Master of the Web puts an end to it all.
“Then we have to grab the last relic of resource, then we ask for the word “Existence”, I hear from the terrace of my neighbour, the philosopher, who apparently is dictating an essay, just as I indulge in profound reflections upon Elusiveness and Beauty.
The spider and I are eavesdropping - mesmerized.
“ We can turn towards the entities, die Wesenheiten, the things that ARE”, he continues, and the spider hopefully picks up knife and fork, “but then we have a problem.”
Confused the spider drops its cutlery, because till now it didn’t have one.
“How do we ascertain wether the entities are real or not?”
This, my good man, the spider giggles, is very easy indeed. And bites into that, what still Is - but will have Been very soon.
“The nature of Being”, “the Concrete”, “the Abstract”, all these words flutter airily past my ears, lightweight as spider threads.
A little bit sticks, but you cannot grasp it…

Email ThisBlogThis!Share to TwitterShare to FacebookShare to Pinterest
Labels: Breakfast at Tiffany's, spiderwebs, Theodor Fontane, Under the Pear Tree 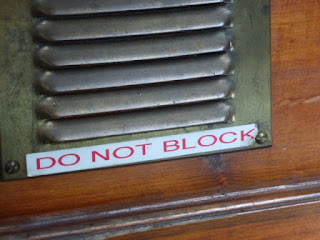 Dear You,
I must have got that wrong.
Saw this 'Writing on the Wall' on our narrow boat trip, when we travelled for one week on the Leeds & Liverpool Canal, and then drove with a van up to Newcastle, Durham and Edinburgh.
"Do not block" - today. when I sifted the 1235 photos from our lovely, lovely tour I saw my mistake:
error - so I am allowed to blog on!
I am also very thankful to Susan who writes the blog "Southern Fascination" - she shook me up by a recent comment, asking: "So, Dear Britta, has the traveler made it home? You are missed."
That touched me. I thought of an well-known Zen-story, where a learned man travelled a long way to meet a Zen-priest, to learn even more about Zen. You know what follows: the monk pours tea into the cup of the guest, and pours and pours. "But can't you see that the cup is overflowing!" cries out the guest. "I know", answers the monk, "so is your mind - you have to empty it first to be able to receive more."
And boy: my mind was overflowing with impressions. The chip card of my camera was more carefree - almost 3000 photos it filed without grumbling - having accompanied me
- two weeks through England & Scotland
- followed by a wonderful week with friends in the Imperial Spa Bansin at the Baltic Sea, and then
- in an impressive week at Rome, together with husband.
So: my cup was more than full. Full with the lovliest Darjeeling, to stay in the picture, but nevertheless: overflowing. 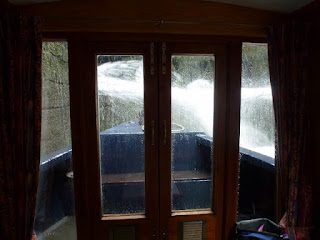 But you know me: I never am quiet for long, and I am a roly-poly doll (no, I didn't gain weight - though the many "FullEnglish breakfasts" tried their best, 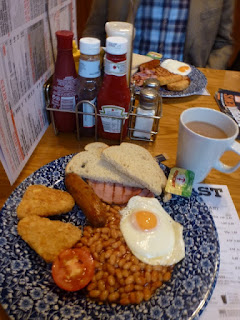 as tried the many, many pubs with their special craft beers - our navigator Matti is a specialist for these arty beers, and finds always the right smashing pubs: 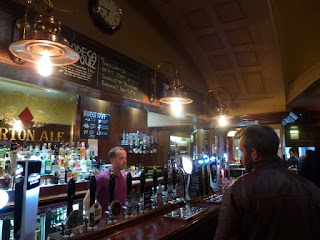 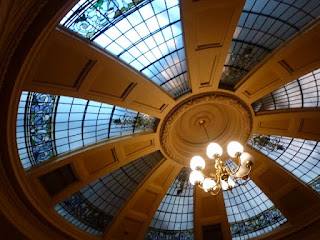 and then a London friend, an editor of a big newspaper, joined us (among other lovely people) - and he was a beer expert too; he had written a blog on craft beer with a title like "Through the Year with 365 different craft beers" -- well, and then imagine me (if I drink beer at all, on a hot summer day, it must be a wheat beer):
I will be remembered as the Little Red Rooster - oh no, sorry, I was the only little hen of that party, who always chirped "Only half a pint, please", while the male world bravely tested the hoppy, fruity goods,
But we tested the spirits of culture too -- and enjoyed a lovely landscape (and astonishing good weather), we made music, and visited really impressing cities -
and I promise: I will show you a glimpse of that - pint by pint bit by bit in my next post.
And I will try to dive deeply into your blogs again - of course with better results than the poor guy who one early foggy morning fell into the canal just in front of our narrow boat - nothing happened to him, the canal was shallow, but police and ambulance came nevertheless and helped him - though we had already given him a blanket and the very British panacea, the universal remedy:
a mug of strong, sweet hot tea.