Harris said, however, that the river... 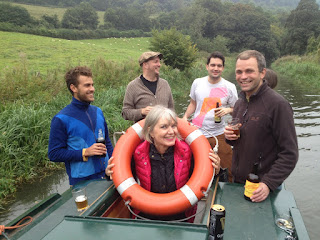 Well - it did in 2013 on our last narrowboat trip, though as in 2013 husband will stay in Berlin and guard our flat: he doesn't feel comfy in a narrowboat, being 1.98m tall.
For compensation we will both travel to Rome later.
Now I'm looking forward to our next narrowboat trip - different crew (not all artists this time) and different route. We will add a week with a car, visiting Durham, Leeds and Edinburgh.
(About the date of the new trip I will speak when I am back - I don't want to invite people from the Wild Wood).

“Here today, up and off to somewhere else tomorrow! Travel, change, interest, excitement! The whole world before you, and a horizon that's always changing!” (Kenneth Grahame, The Wind in the Willows)

Email ThisBlogThis!Share to TwitterShare to FacebookShare to Pinterest
Labels: narrowboat, Three Men in a Boat, Wind in the Willows

I just HAVE to show you this:

Poem - Handed on a Silver Platter 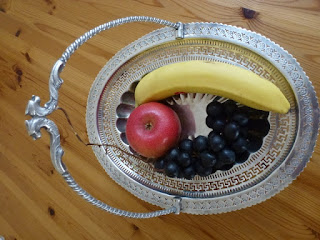 I love the drawings of the Fifties, and sometimes, when I find a book on the fleamarket, I buy it - not because of its (sometimes quite silly) content, but because of the little sketches - so light, so happy, so carefree.
Of course I should add an illustration here and now - but I am to lazy at the moment to pick up my camera.
So I'll try to translate a little bit of a text from Anton Schnack (an author rightly forgotten by now; drawings by Max Schwinger) It is called "Flirt mit dem Alltag - Flirt with Everyday Life", which leads us through the year.
In August I found this sentence for the travelling gardener, which made me wonder:

"Also forgo on early apples and early pears voluntarily: they will be picked unfailingly by free-roaming lads."

Written in 1956.
Well: in the last decades I didn't see any lads nicking apples, or plums, or cherries.
Must have gone out of style.
Maybe it is the fault of the so-called helicopter-parents, hovering over their only child, driving it to violin- and Chinese-lessons - no time to roam through the neighbourhood.
Or fault of the supermarket - everything is there on the shelf.
I remember my astonishment when we still lived on our little island in Hildesheim that people didn't even take home plastic bags of already picked apples that somebody had kindly put in front of her garden gate. Maybe nobody knows how to make an apple pie anymore? Or doesn't care, being bone-idle, as Onslow in Keeping-up Appearances would say?
Well - if no lads had wanted any apples or pears ever, we would never have gotten Theodor Fontane's beautiful and wise poem, written in 1889 and still read today (if this doesn't impress you, maybe this will: "In 2007, the original manuscript of the poem was sold for 130.000 EUR at an auction at Berlin.):

Herr von Ribbeck auf Ribbeck in Havelland:
a pear tree in his garden stood,
and when the time of golden autumn came,
and the pears shone far and wide,
then, when the clock chimed from the tower at noon, crammed
the von Ribbeck both his pockets full,
and when in his pattens came up a lad,
he cried out: "Lad, do you want a pear?" (this is in dialect, can't translate that)
And came a girl, he called "Little dear,
come over, I have a pear!"

but the old one, already anticipating,
and full of distrust against his own son,
he knew exactly, what he did then,
when begging for a pear in his grave,
(...)

You guess it: after three years a pear tree grows from the grave - serving pears for free.
Oh - come to think of it: a lot of things have changed from 1889:

- children prefer pineapples to apples
- dialect is often extinguished
- wooden pattens aren't worn anymore - they are replaced by plastic clogs
- and if old von Ribbeck had offered his pears to little boys or girls, the stern members of child protective services would have cast more than one suspicious look at him.

PS: the silver-plated fruit basket I found on a fleamarket too. 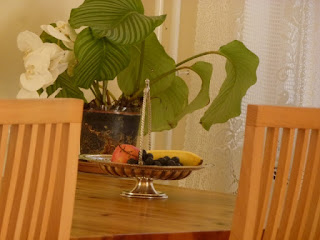