Return of the Drama Queen 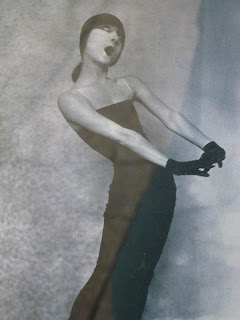 Dear You,
Honestly, I had thought that she had disappeared some time ago - of course with a bang, not with a whimper. Oh no: no early retirement for my Drama Queen.
Yes, I'm speaking of my Alter Ego. (You might blot out 'alter').
Like all those old rockbands she gives a revival tour, promising it will be her last (you bet!).
I shall get wary when words rise in my mind like: "Awful! Catastrophe! Core melt accident!"
I heard them, last week, when I discovered that Google on Blogspot (which is the same) flatly refused to print even one more photo of mine. First I thought it only concerned "Britta's Happiness of the Day."
"Awful!", I thought, but then, being of a Pollyanna-nature, I tried to see the hand of the Tao in it (no later than that I should have become Very Wary). "You were thinking about giving it up already", I told myself with what sounded like my grown-up voice. "So what?"
Then I tried to load up a photo on Britta's Letters from Berlin: Red Card. Finish. ("It is so UNFAIR!", howled my Drama Queen, "they didn't even warn you!")
I sat down and wrote a post - here - and DQ dictated the title: "I NEED YOUR HELP!" (she seldom uses other than capital letters). An hour after posting it I had cooled down. I remembered that I am no longer 17. I thought of a quote from adorable Sophia Loren: "For me - and I think for many other women too - the 30th birthday was the most problematic. At this age Youth lies definitely behind you. You can do the most wonderful things, but never again somebody will say about you: "Yes, and yet she is still so young!"
Oops! So I rushed to my computer and deleted my dramatic message. I told me with a stern parental voice that I can google on my own - and look up myself how to enter Picasa.
And I found two things I had completely overlooked in my dramatic haze:
1. no need to get excited about Google breaking my data protection. Or better: too late - from the moment I used blogger I had given my consent that they might surf through my hardware disk (HOWL!) and - though I still own the copyright - they might give my pictures to others, advertisement and so on.(Only FBI does need a search warrant - Google doesn't. And that is in their terms "irrevocable".).
2. and I had seen everything blurred: when I read that after using up your free 1GB, you have to buy the next 25 GB, I 'saw' that it will cost me about 25 Dollars a month ("Never - I already pay for my website!") - but looking closely there stood: it will cost a little bit over 2 Dollars per month - I think I can manage that :-)
Drama Queen doesn't give up easily: "Think of the SCANDAL with the shop window mannequins!" (the newspaper wrote that they have now cameras inside to watch the customers). I thought about it - hope I look my best in their pics and wonder into which age-group they will assort me :-)
So DQ left, sulking. Not without giving me a beautiful poetic image (see: Drama Queen is very imaginative, full of ideas, a master of putting things into the spotlight, and of the art of timing - we had the last Sunday before Advent commemorating the dead). So she said:
"Might be a good metaphor for your death."
"WHAT?"
"Well: think of your life as a photo-blog like Happiness. Beautiful. And then, without a forewarning, God says: "You have used up your 1 Gigabyte." And you might howl as you like: Life is over."
She lowered her voice and whispered in the raunchy voice of Mae West:
"Hope you had a lot of  fun before!"

"Dreams in a Bottle" 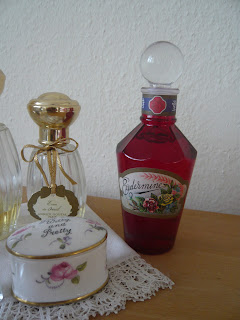 Dear You,
when I went these days through the KaDeWe (our parallel world to Harrods - and much too near to our flat), I discovered at the beautiful counter of Shiseido an old acquaintance in a new outfit: they put the Shiseido icon "Eudermine" into a 'traditional' dress. "First launched in 1897" - though they changed the formula a bit over the years.
Apart from Eudermine I still long for the then (! around 1980)  version of the perfume "Zen", in a  milky-black bottle of obscured glass. It disappeared from the European market, and I was deeply disappointed when they throw the new 'Zen' at the market here - not the real thing, a thousand miles away from the original. I love a few of Shiseido's products - but think their massage techniques much more important - I followed them always religiously with good results.
But though I bought their Vintage Limited Edition of Eudermin -  for me is the other version of the flacon lovelier: clear, elegant and slim. 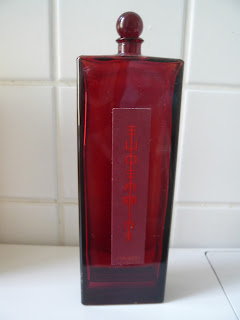 A propos perfume: how do you keep it: do you tell others which brand you use? (I had a friend who kept it as an absolute secret). Do you use the same perfume for years, or do you change it?
How do you find the one perfume you are happy with? Do you still remember your first perfume?
I send you some lovely-scented greetings (well - ther WAS a time when I did just that -- a few drops on the stationery - heaven...) 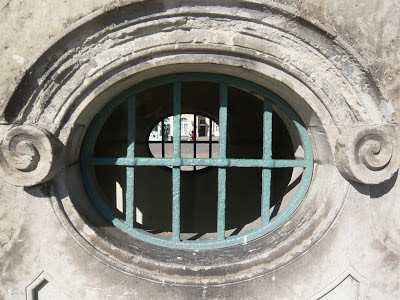 Dear You,
of course you were right in your last letter to hint that all these Chinese Teahouse columns and statues are gilded, and not pure gold. If they were, they wouldn't stand there for long - we have a big problem these months with thieves that come and brazenly steal copper wires or tracks of the S-Bahn - and then people stand at the underground station and freeze, waiting for the trains that will not come...
I grinned at your remark about the political farce concerning the vast amounts of German gold that are stored in foreign countries: at least the Americans allowed the members of the German parliament to enter the vaults of the bank, but denied them their wish to look at it - and the Banque-de-France downright denied even the first step.
Why is the Christian Democratic Union so distrustful? 109 million ounces of German gold, we are assured, lie safely, I repeat: safely! in the safes (sic) of America and France and Great Britain. Does it matter that the politicians are not allowed to see it?
Hony soit qui mal y pense - and if you do, my dear, you may join the new public campain "Bring our gold back home!"
Come to think of it: maybe they already have.
And put it secretly into a very safe place. :-) 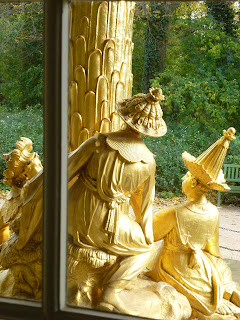 'Earl Grey with a Mandarin' 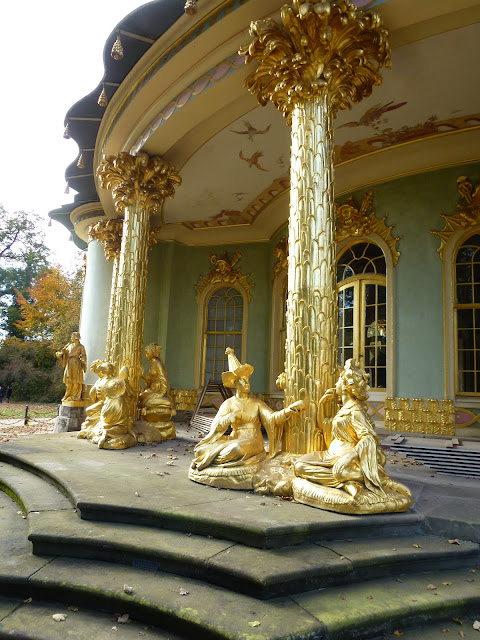 Dear YOU,
yes, admittedly: they were a bit over the top with their crush on chinoiserie, Frederick the Great and his court. But you can't deny there is a big element of surprise when you walk through the wonderful parks of Sanssoucis in Potsdam and suddenly you stand in front of the Chinese Teahouse: 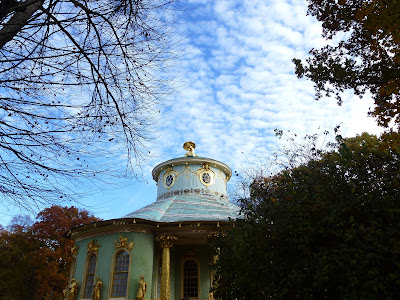 On the roof sits a big Chinese Mandarin with a parasol - both in pure gold! The golden figures of musicians and tea-drinkers in Chinese costumes are as the 18-century artists THOUGHT they might have looked (I was to polite to take pictures of the vast crowd of foreign guests from Asia, who took photos bowing often, I suspect to hide their supressed bouts of laughter...)
Inside you find a beautiful hall with little niches for a cozy tete à tete - or look at the artfully painted walls and ceilings: 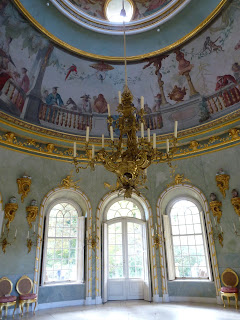 And when you come home after a long hearty stroll through the vast old English park, with abundent red and gold colours of its own, and the crispness of the air has tired you out, and you climb into your bed and close your eyes, then, suddenly, you realize the genius of the architects: behind your closed lids you see the uplifting sparkle, the unearthly glitter and shining of this poetical bulwark against grey-bare November-tristesse: 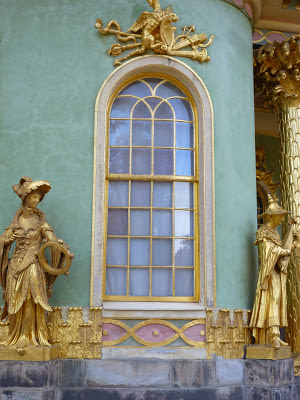 They captured summer - the colours of sunshine and light - something to dream of in chilly ice-cold winter's days... 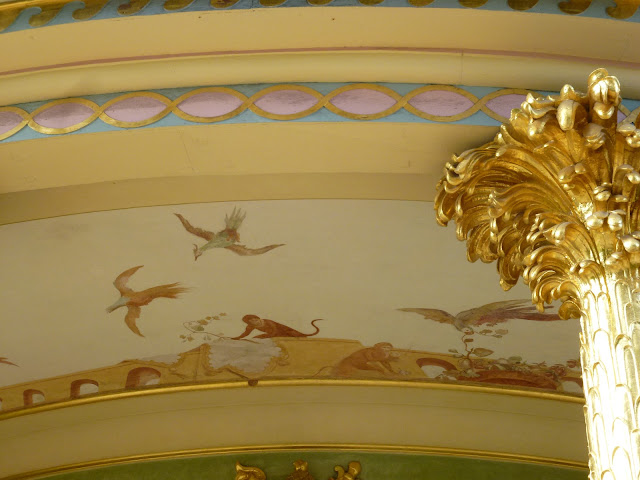