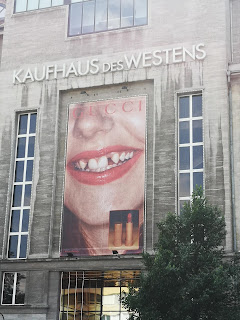 It is so hot in Berlin (I like that, I am NOT complaining) that one needs little gentle pushes to keep the circulation going.
One push into the right direction is this advertising in front of the HUGE KaDeWe. Our most luxurious shop in Berlin.
So - what will our hip Berlin advertisers tell us?

- Will they remind me of my dentist-appointment tomorrow? (Yes, after 8 years of being utterly true I changed my Hamburgian wonderful dentist to a hopefully also wonderful dentist in Berlin - the journey by train is too long, and the fare pretty high).
And: I want to meet my Hamburgern friends from now on without a swollen lip - hope they will recognise me... :-)

- Or: will they remind me that beauty lies in the eye of the beholder? (If so - sorry boys: I will NOT buy that lipstick - thank you, but thank you no !)

- Or: will they remind me of Shakespeare's famous lines :"There are more things between heaven and earth, Horatio/ Than are dreamt of in your philosophy" ?

- Or are they jumping on the band waggon of "diversification"? Only Germany, I think, can have such an extended debate on putting officially an " * " between our gender-specified words like "StudentInnen"  (Student, der = male; Studentin, die = female - and, being fair: officially and short "StudentInnen", pl - thus demonstrating that there are men AND women who study - and now they fight for the rights of the  third " * " group of transgender people. We are asked to write that into each and every text, dear "reader- * -resse".
Uiiii....

OK - their only aim might be to catch my attention. True: they have it.

A Few Days in Tirol, Austria

We were so lucky: the weather in Austria was utterly fine, and thus The Flying Dutchman was able to show me many places where he had stopped with his parents on their way to Italy - long time ago. 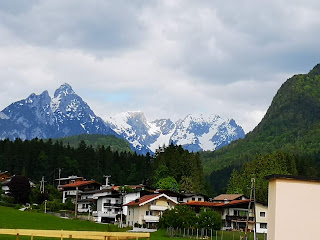 The little village... and vibrant nature... 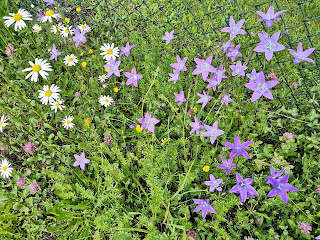 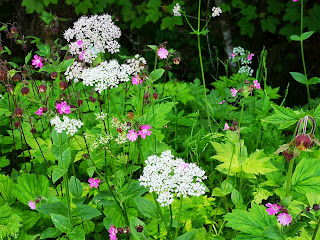 A Wallfahrtskirche that was a bit spooky (inside) ... 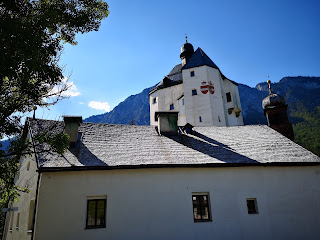 But outside the sun and after a good icecream-coffee ... 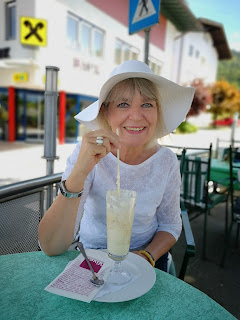 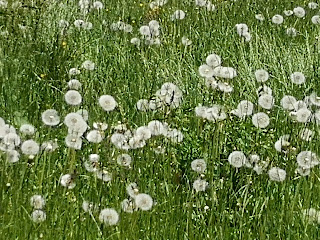 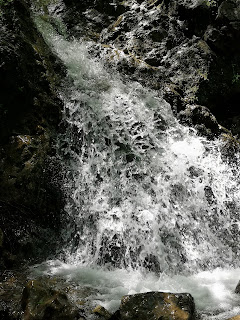 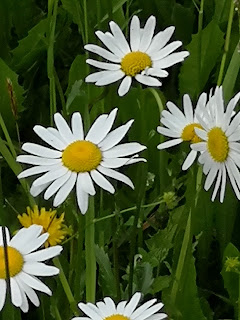 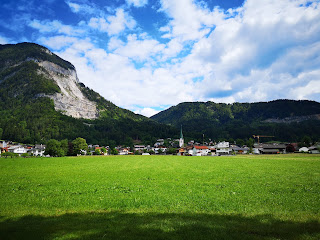 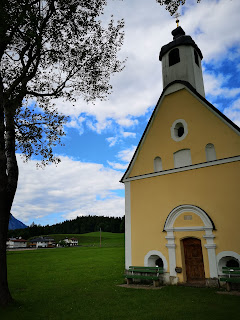 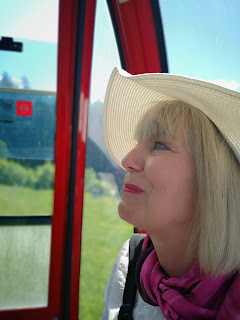 We went up to a mountain in Hopfgarten, the Hohe Salve, that is over 1800 m high 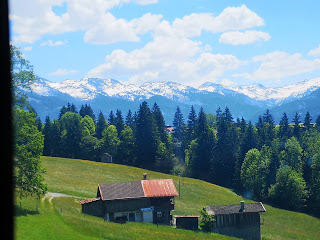 ...flying lightly with the cable car (if that is the right expression for Seilbahn) 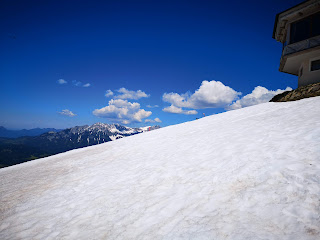 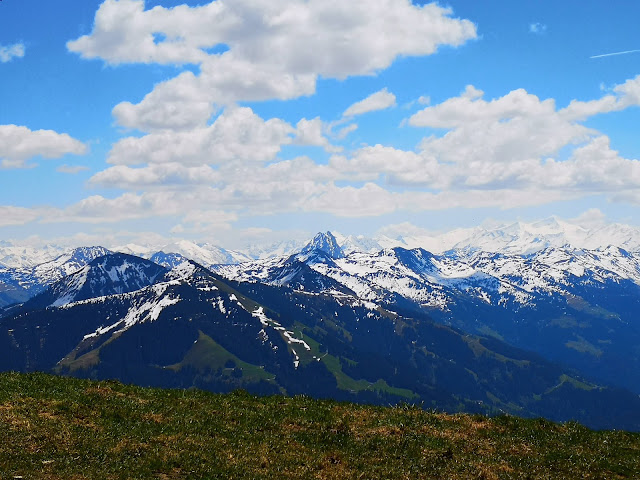 You See What You Want to See

When you come back from a holiday - and this was a short one, just a week in Bavaria and Austria - it might happen that you see things in an utterly different way.

At least for a while.

Or you might forget what seemed to be a huge problem before. In the last week I had completley forgotten the chaos in our "Hinterhof" (Hinterhof is how Berliners call the huge backyard - if it looks like ours). 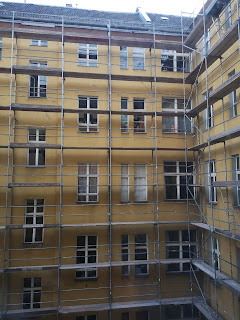 Before I left I thought: that is an invitation for burglars. Then I forgot.

It all depends on the way how you see the world:
pessimists would say: "Britta - I must warn you - that might be the start of dementia!" (Sorry, what did you say? And, by the way: who are you?)
The ones with the rosy- tinted glasses (or the Buddhists, who are no optimists) say:

"You see what you want to see."

So: life is about perception, and finding balance. 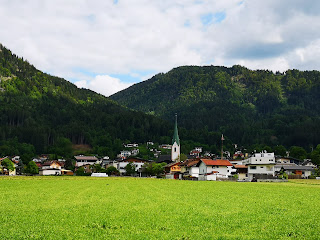 Thank you so much, Joanne! (Noragon)

thank you oh so much for the two lovely kitchen towels that you sent me!

It was a complicated journey for them from the USA to Berlin in Germany:

1. you sent me an email and asked for my address (you had it once, when I ordered a beautiful red scarf from you - but it was lost).

2. You told me about your plans - WOW! - sending those wonderful kitchen-towels to all those bloggers you communicated with - a bit like Tibetian peace flags.
And the towels were a gift!
(First I did not understand this - and wanted to pay, and order some more -- than you explained)

3. Two days ago I got a very strange letter from the German Customs Authority.
They had, they told me, a letter waiting for me,  mysterious and uncleared.

I was puzzled: a letter from the USA?

And than I had the idea: it must be from you, Joanne!

Thus I walked to the Zollamt - it was a beautiful, sunny day - and I found the street, not that far from my home. BUT - the street ended suddenly, far from the house number they had given me.
I asked a lady who said: "You have to walk through the Rudolph-Wilde-Volkskpark, it's on the other side".
Although I have been often in that park, I never had crossed it before.
Stunning!
I saw the old RIAS-Deutschlandfunk- Radio-Station.
And the the Zollpostamt.

Discussed with the officer-Lady inside, who gave me a waiting number, waited, and came then to a very friendly good-looking young guy.

And I went home, so happy, and so grateful to you, Joanne!

THANK YOU - they are really beautiful! Yours, Britta

PS: I took some photographs - but till now Google hasn't transported them. But I will no longer wait to send you my thank-you-notes - and the pictures will come later. 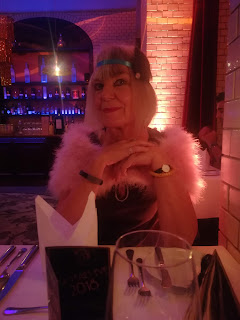 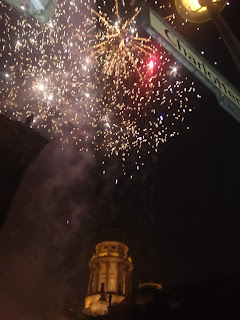 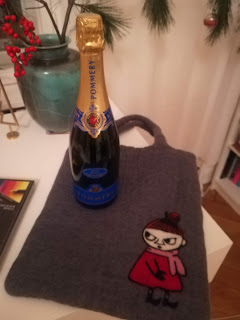 "Old and New" - that is how the Dutch call New Year's Eve.
I like that - and it gives me something to think about.
Some of you might have noticed that I (megalomaniac as ever) started a new blog - in Dutch.
I do it to force myself to write a tiny coherent text (though: coherent...mmmh...)
I started to learn Dutch in autumn 2017 - and really work a lot to grasp it.
Reading and translating it is ok (at the university we have to read literary texts that a lot of Dutch people will not know); understanding conversations is ok, though one has to listen very carefully, and writing, well... Very difficult: to speak the language, fluently I mean.
At the university I wondered: in some language courses we had to discuss (the modern method of learning a language - just jump). I was flabbergasted: we greenhorns (some even from other countries and thus with an interesting accent different from our also interesting German accent) discussed in little groups of three or four - and the teacher often was far away in the seminar room, helping other groups smattering... hahaha, that (and I mean the students, not the teacher!) reminded me of the German saying "The Blind leads the Lame".

Because all my life I tried to keep my "old" friends when Pomp and Circumstances drove me into other parts of the world (I moved 17 times...) - and I managed that fairly well.

So: I want to have the cake and eat it (oh yes - not only megalomaniac but also immodest! - though this might be two sides of the same coin).

I want to keep you, dear old friends - and the new Dutch ones.
(And there are many things that connect you - think of 1652 - 1654)
(Not only megalomaniac and immodest but also insolent - which reminds me of a politician... what was his name again?)

Oh: WOW - Google reminds me - the words jumps up in the right corner of my computer display - "Second Christmas Day - Tomorrow"
Had I but known! Thank you, Google!

I wish you a Happy New Year - Oud en Nieuw - and "Stay with me!" dear friends!

PS: If you are learning Dutch too - or want to make some educated guesses - this is my new blog: www.brittasnederlands.blogspot.com 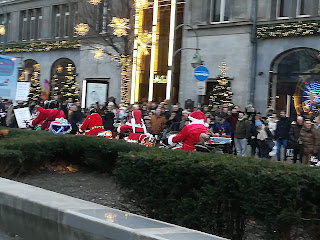 In Berlin we have lots and lots of demonstrations. It is the democratic right of persons to utter their opinions - and sometimes you see 100 policemen protect a group of five lonely demonstrators, and the people wait - passengers on foot and cars - to go further, and sometimes we are not that full of inner peace as Christmas promises...
"No!" I thought yesterday - "another one! Right in the middle of the highest traffic, right in front of the KaDeWe!"
And than they came: hundreds of Santas and angels on motorbikes -

WHAT A BEAUTIFUL SIGHT!